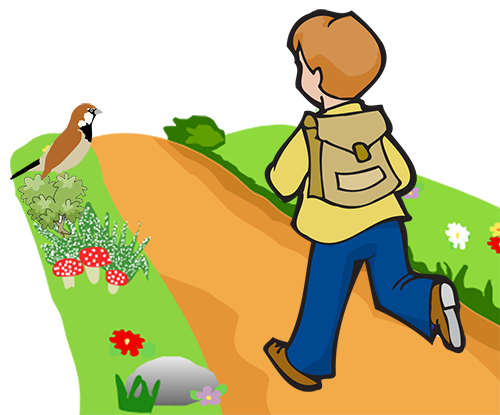 “Sam's Pet” is one of the outstanding stories of the first biannual International Short Story Contest 2017 written by Aditi Vishwanath, India.

Sam was a kind and humble student who was studying in class VIII. He was the brightest student in his class. Because of his generosity and modesty, he had many friends. One day, when he was going home after school, he heard a bird chirping behind the bushes; it was loud and seemed in sorrow. Sam walked behind the bushes to help the bird. It was a sparrow. It had injured its leg and blood was oozing out. Sam ran to a nearby medical shop and treated its leg.

The sparrow felt better and it was happy again and wanted to fly, but couldn’t as its wings were broken because of the serious injury. Sam and the sparrow were both disappointed. Sam had an idea! He took it to his home and showed it to his parents. Their parents suggested Sam to put the sparrow in a cage, but he disagreed. He told that he wanted to give it a little freedom in the house. So Sam collected some hay from his play park, arranged it in an old cardboard box and made a new open place for the sparrow to live in.

He first wanted to treat the bird. So that evening he took it to a veterinary doctor who lived nearby. The doctor suggested giving nutritious grains to the bird and caring it till all the wounds completely healed. Sam did everything just as the doctor suggested. In a few days the bird recovered from all its injuries and Sam felt that the little bird needed it’s world now and he let the bird fly away.

After the bird left Sam started feeling lonely. But after some time he heard the chirping sound of not just one but many sparrows. He felt by the chirps coming closer to him so he ran out to the balcony. He saw in for a surprise, a host of sparrows were flying around his house. Sam realized that the sparrow was happy by the care and affection he had given. It had gathered its family and had brought them to his house. Sam was very happy and delighted by seeing the host of sparrows.

The sparrow showed its family the place where it lived these days, the sparrow family also started living at Sam’s home. He gave them food, care and affection. His parents were very happy seeing him and the sparrows loving each other, playing and enjoying each other’s company.

Sam however showed special affection to Mimi (as he named), the sparrow which he had treated first. Mimi was now Sam’s best friend. They both played together every evening.

Sam is a big, rich businessman now but remains kind, humble and generous. He still remembers Mimi and the sparrow family and the fun he had with them. He missed them since he shifted to another house and still keeps an album compiled with the photographs of sparrows.