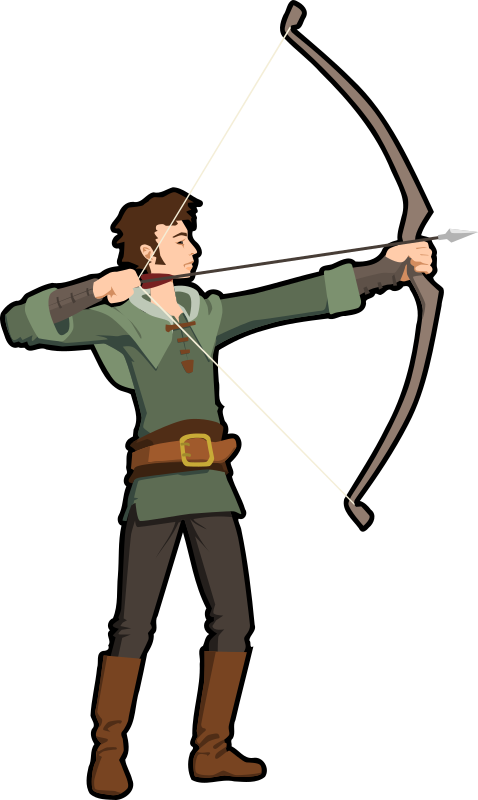 “Robin” is one of the outstanding stories of the first biannual International Short Story Contest 2017 written by Rebecca Pretorius, South Africa.

The spring morning air was crisp as he made his way swiftly through the forest, not making a sound. He heard the leaves rustling in the breeze, the birds singing their cheerful morning song, and the stream trickling over the rocks and ridges. He pulled his arrow back touching his cheek, lining up a perfect shot. Suddenly the stag got a fright and sprinted away disappearing into the dense forest. Disappointed, he dropped his bow, turning around only to behold a beautiful girl, with long brown wavy hair. She was wearing a deep blue dress and was bare footed, shoes in her hands, as she happily looked at the flowers and splashed in the stream. He jumped up frustrated to know that it was a silly young girl that caused him to lose his stag.

“Excuse me gal!” He shouted, while walking towards her. She whipped around to see the tall muscled Robin standing on the opposite side of the stream. Startled, she took in his handsome appearance, hazel eyed and dark brown hair, quiver on his back and a bow in his hand.

“This ‘gal’ has a name and it happens to be Mariam.” She snapped back.

“My apologies Miss Mariam!” He said with a sarcastic little bow. “But I believe you just chased away my stag.”

She exclaimed, “Your stag? And how may that be your stag?”

“Well then, I am glad it got away.” Mariam huffed.

“So you rather I starve and the stag live another day, your Ladyship?” Robin drawled. At this she looked surprised.

“Well then…” She said with a smile, impressed with the young man despite their quarrel. A smile grew on his face and he started to walk up the river bank. She reluctantly followed.

“Educated I am. You see milady, I’ve been living with a friar my whole life so my bed time stories were usually literature and history.”

“And what of your mother and father, sir?”

He looked at her and a smile grew on his face. “You need not call me ‘sir’... call me Robin.” He then continued walking.

“All right ‘Robin’, what about your parents?”

And so their friendship grew every day. When Robin went hunting, she would be waiting for him at the stream. They would walk for hours in the forest, speaking of their daily activities. She would humor him with stories of her two younger siblings’ mischief around the castle. He would retell old tales, which he had learned from Friar Tuck.

One day Robin was on his way to the town when he heard the sound of groaning and beating. He dashed in the direction of the sound, and he saw an elderly man being beaten by the castle guards! Immediately he spoke up,

“What is this?” He demanded.

“It’s none of your business. Now go along lad!” grumbled a guard. Disgusted by the injustice, he stepped in front of the elderly man, and questioned again. “WHAT HAS THIS MAN DONE TO DESERVE THIS?” With no reply they came forward and surrounded him. Suddenly he felt a heavy blow dig into his side. He fell to the ground in agony; they continued afflicting pain until he was unconscious.

He woke with a shudder. Not being able to open his eyes as his muscles pounded and his wounds burned; helpless he gave a low moan.

“Hush now, lay still, you’ve been injured badly,” he heard Mariam’s sweet voice whisper as she placed a soft kiss on his forehead. Suddenly a heavy hand rested on his shoulder. A smile grew on Robins face. Pushing past the pain, he opened his eyes. “Johnny my friend,” with the strength he had left, he put his hand on the young man’s shoulder, “Thank you for… saving my life.”

“I couldn’t let them finish you. Besides you have a debt to repay me” Johnny replied with a bitter smile.

There was a loud bang and the Friar came running through the door “Friar, what is it, you look awful”

“I have some bad news” he announced

“The sheriff has heard of Robin’s doing and is sending guards to arrest him as we speak!” the Friar exclaimed.

Robin tried to get up, but got pushed back down again by Mariam “And what do you think you are doing?” “I need to get out of here, you are all in danger!” Robin said.

“Well that is too late isn’t it, we’re all in danger anyway!” exclaimed Johnny. Robin lay back down knowing Johnny was right. “If they know where you are staying they know whom your staying with,” Johnny pointed out.

“That would mean they do not know you two are here. Leave now, let the Friar and I head for the woods,” ordered Robin trying to get up, only to be pushed down again, this time by Johnny.

“OH! Would you stop that! ” demanded Robin.

“Do you really think you are goanna get rid of me that easily? Besides, you owe me.” Johnny added with a mischievous grin.

“You three men alone in the woods, not a good idea, I’m coming with you!” Merriam proclaimed. “Well then, we don’t have all day, we have to get going,” and with the Friar’s order Mariam helped him gather what they thought they might need in the days to come. Johnny hooked the donkey to the cart and helped load Robin and all their belongings. When all was set they looked back at the horizon, where there lay the little town of Nottinghamshire, the place they all once called home, now to be left behind.