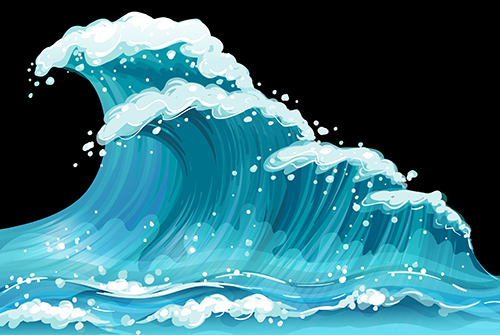 “Ocean Girl” is one of the outstanding stories of the first biannual International Short Story Contest 2017 written by Günes Soyer, The Netherlands.

Cryptic mist enveloped The Schrijver as the fiery vessel skimmed over the unbroken water. Whilst Eleanor struggled with a cumbersome bundle, a bead of sweat trickled between her apprehensive eyes. She paused, gasping for breath. The droplet fell, hanging for a moment in midair. Eleanor adjusted her backbreaking burden, groaning at the pressure on her throbbing back. A loud clamor shoved her back to reality. “The captain is overboard! The captain is overboard!” The cry pained Eleanor’s ears. She slid the parcel tenderly from her back. No one noticed. A towering wave unexpectedly reared up in front of her. Eleanor’s eyes were popping as a terror stricken scream left her mouth; the water wasn't calm anymore.

Bloodthirsty foam licked the sides of the fatigued Schrijver, as the savage surf beat upon her battered hull. While the crew prayed to the heavens, streams of fury and hatred rushed to The Schrijver, threatening to drag her to a watery grave. A raging fire, streaking down from the sky, lashed out against the brave ship’s proud mast. Blue fire leaped over her sails, hungry for death and destruction. Grim clouds loomed over The Schrijver, enveloping the crippled galleon, and devouring any rays of light that dared penetrate the tempest.

Eleanor hesitated, observing the delirious state in which the crew now found themselves. An arduous battle ensued in her labyrinth of a mind: ‘I must; this is my chance. No! They looked after you, do you really wish to betray them? The captain is gone; it’s my turn now.’ Eleanor wearily closed his eyes. Then, her eyes snapped open: she had come to a decision.

With her ginger hair lashing about her freckled face, Eleanor bore the force of the torrential gale. Determination resonated from her like warmth from the sun. Her high, stretched voice spliced through the rage of the storm: “Lower the sheets! Slacken the ropes!” But she was too late. A burst of pure vehemence lunged at the sail, roaring with hatred. It’s mighty claws tore at the sails, venting out it’s oblivious fury. The sail was reduced to mere shreds. The infallible tide of blue surged towards The Schrijver, while Eleanor endeavored hopelessly to remember her sailing lessons.

The oars! “USE THE OARS!” She shrieked, yelling it out like every inch of her body depended on it. The wave was almost upon them; the crew galloped for the oars. The wave was within reach of Eleanor's arm; the crew plunged the oars into the water and... The wave collided.

Eleanor was flung onto the deck with the impact, yet she had not been hurt gravely. You could not say the same for the ship. She groaned, then shuddered. The Schrijver tilted heavily onto her side: her framework had truly taken the toll. “She's tilting!” Someone cried, and Eleanor realized with a jolt that this was true! The Schrijver had fought her last storm. She finally yielded to the power of the vast ocean. Without warning, the galleon leant over, trapping the crew under it, plunging them into the water. Eleanor opened her mouth trying to access air, but swallowed only water. Was this what it was like to drown? Hazy shapes danced at the corner of her eyes. Eleanor's vision turned fuzzy; her body went limp. She struggled for life, although she could feel herself falling, slipping away into the void.

Those were the last words I heard from her.

“I can feel my body falling, slipping away into the void…” She did not wake up that morning. Now, I wonder whether it was a relief for her, not having to feel her pain anymore. Even though I only knew her for a night – an incredible night for sure – I still miss the girl I found in the sea, clinging weakly onto the side of our boat. I’m still pondering on her story, thinking. What would she have wanted me to do?