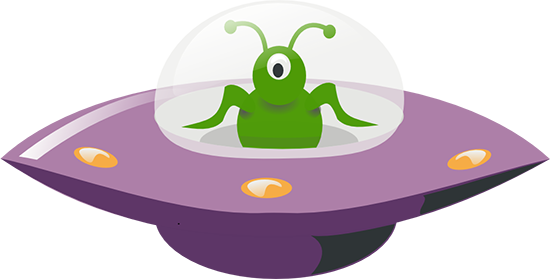 Nova’s watch rang, “Oh! I need to go now I’ll see you later” Nova quickly got off her chair, placed it in front of her hologram screen, grabbed her needle of XSerum, got her clipboard and quickly ran to cell #37Y.

The cell had an alien named AT09. Nova got her needle ready and opened the force field cell’s door. She noticed the hungry and boney alien in the corner of the circular cell and quickly injected it with the XSerum, the solution which stops an alien from attacking any human or animal. Nova noted down how the alien reacted to the new XSerum,

Meanwhile, Leroy and Jewel were observing a spaceship found near a forest in London, “We need to see if there are any aliens inside the ship before we investigate it,” said Jewel while placing her pencil behind ear.

“Let me get the X-Ray vision goggles!” exclaimed Leroy while hurrying to the weapon vault located in the 5thfloor. “Wait for me!” Yelled Jewel running after him.

In the meantime, Zoe was studying alien bodies. “They can communicate without speaking. How is this even possible? Ha! Telepathy!”

Jewel and Leroy were looking for the X-Ray vision goggles in the weapon vault. “Wow, I haven’t been here in a long time…” said Jewel in amazement.

“Yeah, we need to find the goggles fast and leave though, only 40 minutes until the meeting” said Leroy

“Found them!” exclaimed Jewel. “I think walking would take too long, we should take the hover boards there,” suggested Leroy. “Alright let’s go,” Replied Jewel.

Half an hour later, Nova’s watch rings again “Oh it’s time for the meeting” She said in her head. She hurried to take her tools that were left on the small table and locked the door. Nova ran into Zoe while walking to her desk.

“Hey Zoe! Are you going to the meeting?” asked Nova

“Yeah of course I am” Zoe replied.

“Hello everyone! So as you know, today we will have a meeting about the progress we have made and some other topics,” Said Mr. Parks, the supervisor of the NASA branch in Manchester.

Zoe stood up, “Sir, I’ve made a fascinating discovery!”

“What is your discovery Zoe?” Asked Mr. Parks.

“Well…I’ve found out that aliens might have superpowers,” She said. “I’m not sure if this is good or bad,” She said worriedly.

“What kind of powers, and how do you know this?” Mr. Parks asked.

Zoe replied “Well, two aliens have been found to be using telepathy, the power to communicate through minds, and I found this out when I used The-Mind-Reader-3003 to read the two aliens’ minds and compared them,” Zoe answered. Suddenly, Mr. Parks’ phone rang.

“One second, I have to take this call,” said Mr. Parks as he walked out of the room to answer the call.

“Help! The aliens are getting out of their cells, something’s wrong with the force fields, get out, NOW!” Before Mr. Parks could reply, the call was disconnected. Mr. Parks went back to the meeting room,

“Everyone! Go to the emergency exit quickly!” He yelled

“The aliens are getting out of their cells, warn everyone you can and get as far as you can, NOW!” He shouted.

When everyone was getting out of the building, the aliens were using their telepathy to call aliens from the planet ORBiX-JW,

“We need to find a place to hide on planet earth, make humans think we’re gone and then kill them.” Said AT09 in his high pitched, vibrating voice. All the aliens followed his order and hid in a volcano located in Hawaii.

In the meantime, Nova, Zoe, Leroy, Jewel, Mr. Parks, other employees at NASA, and their families were in the safety ship supplies to get to safety.

“Guys, I think the safety ship won’t survive forever, we need to do something about the aliens,” said Nova.

“Yeah, the aliens are too strong and someone needs to be brave and fight them off,” said Jewel.

Leroy worriedly said, “I think we all know what to do…”

Minutes later, everyone had been equipped with weapons, protection, and courage. “Guys are you ready to do this?” Asked Nova.

Everyone nodded their heads.

“Let’s go to the planes and fly around the islands nearby, the aliens would most likely be hiding there”.

The next day, they were at Hawaii and looking around volcanoes to find the aliens. “Guys… I think I found one...” whispered Zoe.

“Alright, I think we should stay in the hut for a bit to rest, we’ve been walking all day, we can’t fight when we’re tired,” replied Leroy

“We could go to that hut over there, it’s really close and we could keep an eye on the aliens.” Jewel suggested. “Alright, I’ll stay on top of the volcano just to have a look, I’ll be fine,” said Nova.

Nova climbed up the volcano to look at the lava, when she was sitting there, she was met with a surprise.

“Guys! Guys! Help! Help! It’s an alien!” She yelled at the top of her lungs. The alien teleported itself next to Nova and pushed her into the lava, but when she was about to fall into the lava…

Nova calmed down, “Oh… It was just a dream.”