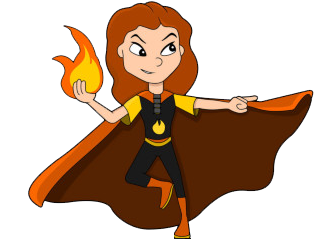 “My Dream” is one of the outstanding stories of the first biannual International Short Story Contest 2017 written by Caia Mădălina, Romania.

Some people say that dreams don't come true, but that’s not right. Even though I am now an ordinary girl, I wasn’t like this from the beginning. Since I was little, I have had some unusual powers. I could control the fire.

I was 16 years old and I lived in an agency which trained children with supernatural powers. I had been there for all my life. They used to call me “P31”. Even though I was considered their best agent, I was not happy. I wanted to be a normal girl.

One day, commander Brigham called all of us in the conference room and said:

– Everyone, pay attention! For tomorrow we are going to choose an agent who must go to California to find Helen Hall.

– Commander, when will the person be sent? Asked agent P32.

– Alright then, this is the end of our meeting. Commander Brigham said.

It was 5 p.m. I was in the training and I had to fight P32, who was my rival. She controlled water and I controlled fire. She always thought that she was better than I was.

The fight could go on, but I had to go to see who must leave for California. I went quietly and carefully to find out the agent's name. All of the others looked at me angrily and I wondered why. Suddenly, commander Brigham came to me.

– Agent P31, come with me to the conference room immediately!

So, that was the moment I realized I had been recruited. I listened to all the instructions I was given.

The big day had come! It was 10 am in California and we were ready for what was going to happen. Helen was a very bad agent and almost unbeatable. I jumped from the helicopter and looked through the entire forest for Helen. I saw Helen. During the fight I took all my strength to blast a fire ball at her. Suddenly I felt so weak! I couldn’t see anything around me, but unexpectedly, I saw a beautiful house.

–You finally woke up!, someone said.

Suddenly I got up and I saw a boy with blonde hair and blue eyes.

– Who are you and who do you work for? I said nervously.

– My name is Zayn. I found you in the forest. You were unconscious. Are you feeling alright?

– What? Asked me Zayn very confused and amazed.

– Where are you from and where is your home?

From the other room I have heard someone saying:

I always wanted to be an ordinary girl and I finally could. I went to high school. It was all just as how I had imagined it to be. Thanks to Zayn who helped me from time to time. On my first day, Zayn came with me to school. We were at the front gate.

– I must go. I think you can handle this, Zayn said.

Then a beautiful girl came towards me and said:

– From now on you can stay with me, and I can show you how it is around here.

She helped me to become a normal and popular girl. Zayn wasn’t contented at all. Isabell, that was her name, had become my best friend. One day, Isabell called me because she wanted to tell me something.

– I can control the wind

– And I know you control fire.

I remembered that during the previous battle I had seen Helen escaping.

– I came back to take my revenge! You will die!, she said

Zayn had come to see me at that time,

– Zayn, I do not have time to explain! Hide yourself! I said.

While I was fighting with my archenemy, I saw a helicopter. It was Brigham who had come to save me.

Finally I defeated Helen. I was overjoyed. After the fight, Brigham asked me to return to the agency, but I did not agree.

– My dream has come true! I have found a real family and I don’t want to lose it because of my supernatural powers. And that was the last time I saw Brigham.