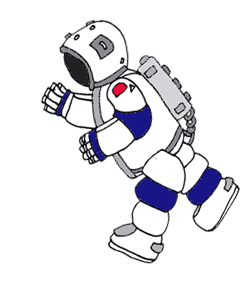 “Hyper Jump Unlimited” is one of the outstanding stories of the first biannual International Short Story Contest 2017 written by Yajat Charpe, India.

“Welcome guys, well this is going to be day 1 of the beginning of our new life, space is infinite and we will conquer it,” began Ben again. Dr. Emidio Ruben spoke next, “We have been waiting for this for so many years now, and finally we will be able reach out and make a new settlement beside the Milky Way! Our life supporting galaxy”

“Ready yourselves for the challenge!” said Jason. Blast off in 10, 9, 8 ... 2, 1!! Everybody was thrown back into their seats. The force pushing the rocket up was steadily increasing and they had been launched into space. Boosters on full power, the throttle started ascending and fluctuated, the wait was over. They were up there, all they needed to do was start the transformation which would be a long process.

“The wait is over now get those feet moving and pull the machinery up, system please check the right wing.” Said Ben.

“Herk & Tom, come with me, Jason keep watch of the fuel gauge, Ethan keep an eye on the machine Help”, Ben commanded. As soon as they reached the left wing the damage was clear, a small iron rod struck the carbon fibre wings with great force. Chunks of the wing had broken off and were floating off into space. The rod had punctured the outer cower and the protective layer of the spaceship.

As soon as they pulled the iron rod out, the fuel gauge started to decrease. Jason screamed, “The fuel is leaking!” Ben quickly tried to close the leak and even though it helped the pressure was still decreasing.

They hadn’t got any contact since the time they begun the repair work, and they were confused, rushing as fast as they could on the stretching rope. When they neared the door and pressed the button it didn’t budge, they tried again but it was of no use, it did not work.

“Just fasten yourselves to the ship with this harness. Hope nothing bad has happened inside.” Said Ben.

“I will try to contact them inside using the normal ship radio and the earphones,” said Tom, “Roger- this is Tom do you copy. DO YOU COPY!” he looked at Ben, “No response at all. I’ll try Jason’s ear plug.” He said, “Hello, Jason- do you copy?”

“Yes right here, there is a processor shut down and there is no power. Take help from the international space station. We will take permission from land authorities to abort the mission.” said Jason.

“We have contact from the international space station. Restart the engines by the switch board room, that will give you power, which ever processor is not working should work after that,” Ben commanded, “Jason, use the flashlight to get to the server room”

“Got there” told Jason while opening the compartment, “there is a green wire, red and blue, the blue one has blasted”

“Ask Ethan to get another one” said Ben.

“Connected, please try the door again.” The lights started one by one and the power unit was turned on. Ben, Herk and Tom immediately got into the pressurized cabin, removed their suits and went to their seats. Once all of them came together they did one last thing,

“Put on your seat belts, put down your visors, turn the engines on and let’s go!”