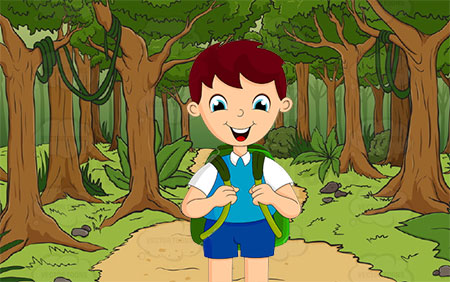 “Gopal” is one of the outstanding stories of the first biannual International Short Story Contest 2017 written by Aanya P Sarkar, India.

Once upon a time, there lived a boy called Gopal. Their house was near a huge forest with many animals in it. He lived with his mother and grandfather. They lived in a pretty cottage in the outskirts of the village. They had a beautiful garden with many flowers.

Gopal studied at home but wanted to go to school. One day, his mother thought that Gopal should also go to school with other children. Gopal was very excited about it and got his new uniform, bag and bottle. Then he remembered that he had to cross the big, dark and deep jungle. He was very scared of crossing the jungle so he went to his mother and asked for advice. His mother smiled and said that if he got scared, all he had to do was to close his eyes, join his hands and call out to Lord Krishna for help. His mother promised him that Lord Krishna would always be there to help and support him.

The next day, Gopal woke up early in the morning, excited about the new day and the adventures and wore his new uniform and walked bravely towards the jungle. Suddenly, he heard the roar of a lion and a hiss of a snake. The jungle seemed to grow denser with every step he took. He felt very scared. Gopal wondered who Krishna was. His mother had told him that Krishna was his elder brother and would always hear his calls. So, he joined his hands and called for Krishna. Suddenly, he heard a rustling sound from behind the trees. Krishna came out wearing his favorite yellow dhoti, his armlet and a blue peacock feather on his head while he carried his flute in his hand. He asked Gopal if he was scared and promised to drop him to school every day.

They would hold hands, sing songs and play on their way to school. Gopal never feared the jungle again.