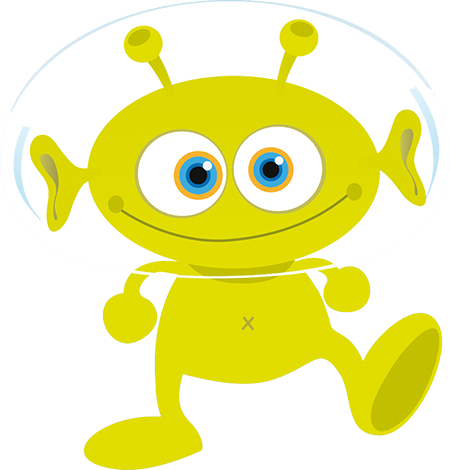 “Cheese the Alien” is one of the outstanding stories of the first biannual International Short Story Contest 2017 written by Hala Majed Ata Nasrallah, Qatar.

Pushing and shoving the impatient children squeezed through the dusty wooden door. Rose stood behind, nervously fiddling with her beetle black hair. A few kids pushed past her.

It was her first day as a teacher, and it was already exhausting. She had just said, "Close your books and head out quietly to the playground”, but it seemed like the children didn’t understand what the word 'quietly' meant.

As the students raced out to the playground with their new shiny lunchboxes, Rose nibbled on a delectable biscuit and walked around the school garden. It was splendid, with daisies dancing and smiles plastered across their faces. She stood against the wall, but immediately toppled backwards.

Rose opened her eyes. She looked around. All she could see were massive balls; everything else was black with snowy sequins everywhere.

"Am I in space?" She whispered to herself.

She looked at her feet and almost jumped at the sight. The bewildered girl was floating on top of a gigantic round cheese. It was the moon.

"This is the most magnificent thing I have ever seen in my entire life." Rose exclaimed excitedly. She felt a tap on her shoulder. Turning around, she saw a corn yellow creature with a big green eye in the middle of his smiling face. To be honest, she thought, it looked so cute!

After staring at it in shock, she figured the funny looking creature must be an alien. It held out its tiny hand and grinned, displaying a toothless mouth; it was trying to be friendly!

"My name is Cheese. What's yours?" the cheerful alien asked.

"Cheese? Is that what you are called?" Rose giggled, her rosy cheeks turning red as tomatoes.

"It is not funny!" Cheese snapped. "I am named after the glittery moon! My mother heard humans that the moon looks like cheese. Therefore I am called lovingly, Cheese!"

Rose nodded, her hazel eyes twinkling as she smiled at the alien, "I'm Rose. I was at school. I was going to lean on the wall, but all of a sudden I fell." Rose said and Cheese listened carefully and said "Follow me, Rose.”

Cheese was literally walking on air, whilst Rose had to swim through space and move her arms quickly to catch up with Cheese.

They had landed on Mars. They stopped at a rose red cube that had a tiny door that was as brown as chocolate.

"This is my most valuable car", said Cheese and before Rose could ask how that little spongy cube was a car, Cheese pressed the button. The box transformed into a vehicle, and cheese’s 'car' soared through the orange sky.

"Cheese, I'm having a lot of fun with you, but I think I should go home", Rose bit her lip.

Cheese looked disappointed, but nodded and pressed a button. The car sped back the way it had come. Pressing another blue button, Cheese gasped loudly.

"What is it?" Rose asked, panicking. "Normally Earth is in between Venus and Mars. However, it's nowhere to be seen!" Cheese yelled.

Rose's eyes turned huge. She fiddled with her hair again. It was something she did when she was anxious. Where are all the people living in Earth now? Is something happening to the solar system?

The silence was deafening. Trying to break the silence, Cheese asked, "Are you hungry?"

Rose replied, "You certainly don't have any human food."

"Actually, I have a few Mars bars and Milky Way bars. Help yourself." Rose thanked Cheese and wolfed down all the chocolate while Cheese searched for Earth. Soon Rose fell asleep.

Rose opened her eyes and stretched. "What a funny dream", She got up and brushed her teeth. She quickly got dressed; it was her first day of being a teacher. Smiling to herself Rose opened the door to get down for breakfast, and there stood Cheese, waving and grinning at her.