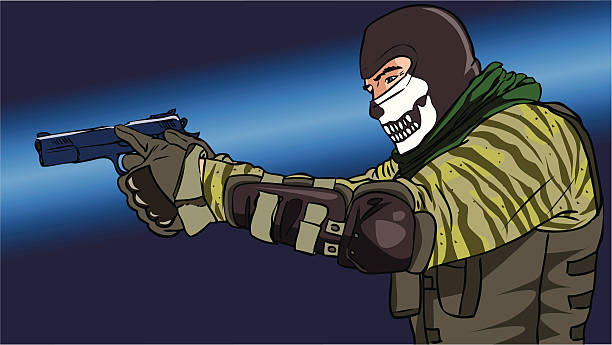 “Call of Duty” is one of the outstanding stories of the first biannual International Short Story Contest 2017 written by Mallika Handa, India.

I chose my weapons and my armor carefully. After gearing up, I headed out of the bunker ready for war. Grey skies greeted me, perhaps as a sign of the oncoming future. Destruction and ruin was all I could see and comprehend. No sign of life was to be seen anywhere. I searched the horizons but the thick black smoke made my vision hazy.

As I walked ahead my vision slowly became clear. I felt something wet and looked upwards only to find that it was raining. Then as if on cue a human silhouette appeared. I was not able to make out whether it was a friend or an enemy. I inched closer, my gun at the defense position. I was hoping for a person on the same side as me but the grey and white symbol on his sleeve indicated otherwise. I stole a glance at his name tag on which either Aaron or Adam was written.

Seeing that his gun was pointing at me and his finger was on the trigger as a reflex action I started firing at him. He fired back at me. I fired back with the same enthusiasm as him. After some time I realized that I had obviously made a bad choice of weapons.

I cursed my luck and proceeded to run out of there as fast as I could for fifteen minutes straight. I could see that he was following me and that someone else had also joined him in his pursuit. I quickened my pace and went into the nearest building which looked like a big house to me. I ran up the stairs and entered a bedroom. The bed covers were all torn and there were blood marks on the walls. I bolted the door behind me and looked out the window to think of an escape route. But I should not have done that. Aaron saw me and took a shot at me. I ducked and saved myself. I turned, ready to bolt out the door and away from the house.

I knew I had to act fast. I looked out of the window and saw a bus or some other oddly disfigured vehicle. I put my right foot on the window pane and took a deep breath. It was now or never. I had to make the leap. Behind me I heard sounds of them struggling to open the door. The latch was giving away. It would be seconds before they would burst into the room. I let out a scream (hoping it would take my fears away) and jumped.

I landed on the vehicle and rolled on to the ground with a thud. I lay on the ground, my arms spread and my body facing skywards. I made out two faces and raised my head and chest so that I could get back up and aim bullets at them. It seemed useless but my only choice at the time. However, I did not have enough time to reach my pocket. They had fired and the sound of three bullet shots echoed through the sky. I screamed and everything went black.

“Aagh… damn you both. You formed a team against me. It’s two against one…that’s not fair at all,” shouted Eve banging her remote at the floor.

“Eve! Language!” came her mother’s voice as her two brothers laughed hysterically in the background. After realizing that the earlier warning had had no effect their mother finally said, “That’s it! No more Call of Duty or any other video games, go play outside the three of you!”