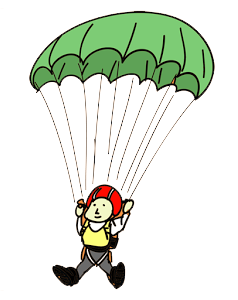 “An Unexpected Journey” is one of the outstanding stories of the first biannual International Short Story Contest 2017 written by Rareș Nedea, Romania.

It was an exhausting year at college and the summer holidays had just begun. Nate was seventeen and in love with adventures and crazy dangerous sports like water diving, hiking and sky diving. Besides that, he had some incredibly crazy friends who were just as in love with these dangerous things as Nate was. Josh is one such friend of Nate’s, and this guy was just unbelievable. He was like a cat. He climbed on everything and he was the strongest of the gang. Another friend of Nate’s was Jennifer.

Jennifer seemed very sensitive, but you should never judge a book by its cover, so you definitely don't want to mess with her. She has been practicing judo for seven to eight years, so she knows how to solve her problems for sure. The last, but not the least was Rob. He was into history and geography, but he had amazing skill as a diver and mechanic.

So, here were four friends who didn't have any clue about what they were going to do during the summer. All their classmates and all the other friends were going to travel with their families and some were even going on a camp. They decided that they don't want to have an ordinary holiday.

One afternoon during the first week of the holiday Josh came up with an idea. He said that it would be cool to travel to Asia and try to climb all the way up Mount Everest. Nate and Jennifer agreed instantly, but Rob was undecided. After a few days of trying to convince Rob to go with them, they made him accept. The following week they made sure all the arrangements were made beforehand. Jennifer had booked the tickets while the boys took care of all the other equipment and supplies.

They left at noon the next day. During the flight they encountered an engine failure, after a few minutes the engine spurred smoke and exploded. The plane was going to crash with one of its wings on fire. They quickly took the parachutes they had purchased for the trip and jumped out of the plane. They landed in the ocean and found land nearby. It was an island; they swan onto its shores.

Nate said that they were lucky to be alive and after they rested for a while they started searching for the crashed plane. They found the plane only the next day, but nobody had survived the crash. They took the food which they found on the plane and started building a place where they could stay, using the debris from the crash site. In search on things that would come handy from the plane, Rob discovered that the luggage area was not completely destroyed. He found their bags. Nate, Jennifer and Josh were exploring the island and were collecting some wood for fire. They returned to the plane with lots of wood and made a fire. They had seen a cave while exploring a part of the island and they decided to have a better look at it the next day.

Early the next morning they took some food, knives and their hiking equipment. They entered the cave and what they saw amazed them. All the walls had paintings with knights and assassins and swords. In the cave they found a round room with a big stone in the middle. The stone had a hole in it. Jennifer found a small strange stone, near a wall. She showed the stone to her friends. Josh thought to insert the little stone in the empty place on the big stone.

As they inserted the stone a small part of the wall was covered in a blue shade. It was incredibly strange because they saw an image on the blue side of the wall. When Rob went closer to analyze it, he was absorbed into the wall. The others ran in after him to save their friend. Suddenly they were in a big room with lots of strange things like swords, daggers, amours, bows and arrows. They heard some voices and all four hid. Then the door which was closed opened and three men entered the room. They took the weapons and left. Rob came out of his hiding place and at the same moment two other men like the three before entered the room and discovered all four of them. They were captured and each put in different rooms. They had heard of a prophecy which said that someone from the future would travel back in time and would end the war between the assassins and the Queen's knights. The savior was supposed to take back a priceless artefact.

They wanted to find out who their savior was, so they started with Rob. He was very clever and quick, but too noisy in moves and he was afraid of heights. Then they took Jennifer, she was almost perfect, but her instincts were not as sharp as they should be. Then they let Nate go and took Josh. He did not reach any qualities needed in order to be the ascendant. The assassins thought about Nate, he was the best of the lot. So they asked him to help them. Nate said that he would accept only if they let his friends help him and the assassins accepted. They were given black assassins’ clothes because they had to take back the artefact during the night. Nate realized that the assassins didn’t know how they travelled in time.

When the night came, the four friends began their task and went to the Queen’s castle. The castle was very well guarded, so Josh and Rob made a diversion and Jennifer and Nate entered the castle. They smoothly sneaked in. They took a knight and obliged him to take them to the place where the artefact was. The knight showed them the way. After they took the artefact which was not very well guarded, they left the castle.

The queen realized that the artefact had been stolen and she ordered her army to prepare for war with the assassin’. The assassins were proud that they finally got their artefact back, but they also started preparing for war because they knew what was coming. In only a few hours the war began and people were being killed on the streets, both assassins and knights. The four friends were also on the battle field when Josh said that it was the perfect moment to back travel in time, so they took the artefact and came back to the cave. They quickly returned to the airplane and Rob tried to fix the radio system from the plane wreck so that they could get rescued.

After they got rescued, they returned back to California, they said that they found the artefact on the island where the plane had crashed and then sold the artefacts for millions of dollars. They shared the money, dropped out of college and started a new rich life without stress. After a few years, they met again and went back to the island; they searched the cave and destroyed the big stone which had permitted the travel in time, because they had realized that changing the past would create a lot of havoc in the present.