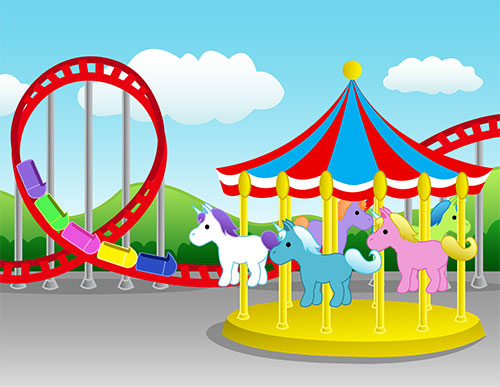 “A Rare Pig” is one of the outstanding stories of the first biannual International Short Story Contest 2017 written by Tinagrit Leelawat, Thailand.

“Attention please, the ferry will arrive to the Lala Island in a few minutes!”

“Let’s get ready” Sam said loudly. The Explorer Team - Sam, James, John, Tell and Knot - were going to the new island theme park. They were looking forward to going on Shaky Mountain in Lala Island. A few minutes passed as they packed up their bags.

Tell shouted, “We’ve arrived in Lala Island!” “Let’s go!” the others shouted back.

They were excited and walked off the ferry loudly. Then Sam saw the laser message on the mountain television.

“Hey! Look at this message. It says ‘Warning! If microphone sensor detects a loud sound, we will release toxic gas from the sky”

They ran to protect themselves quickly. Then the message said,

“The toxic gas from sky will release in 10 seconds!” and a countdown began.

The toxic gas fell for 5 minutes and stopped. The boys continued to explore Lala Island to find the "Strock". Strock was a rare pig that lived in Lala Island. They couldn’t find the Strock anywhere. The message popped up again with the same words.

"Where shoud we go? No Mountain. No Underground," Sam shouts.

"In the RIVER," Tell says to everyone. They already had respirators. But 30 minutes passed and the gas didn’t stop.

“We need to dig through the dirt into the river to go to Knock Mountain and then to Shaky Mountain because my respirator is running out of oxygen! Who has a shovel?” John shouted.

“The microphone sensor isn’t micro. I think it is a macrophone sensor!” Tell cries. The tornado began, pulling in Sam. They tried to pull him back! But it was too much and they lost. Sam disappeared. Everybody was sad.

The tornado took them to the land called “Future Land”. All the roads in this land were the Vantablack color. All the cars needed to have super bright LED lights to see the road because Vantablack was the blackest black color. The boys rented a car to travel the new world.

“Wow! This is the first time I’ve seen the Vantablack!” James said. They were going to the Ministry of Tourism for help. “We are from Lala Island. Can I ask you a question? Why are we here?”

The officer told them, “It’s a wisdom from the old book. Lala Island was under Future Land but it was crashed 974 years before.”

They asked the officer “How can we go back to Lala land?” The officer answered “Okay. Just use the Time Machine in the Staff only door please.”

“Thank you.” Then they went into the Time Machine and back to Lala Island. In front of them, they found the Strock. They grabbed it and went back home with the Strock. They lived happily as friends for many more years going to adventures together and helping each other during dangers.