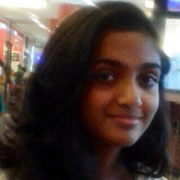 “Victims of War” by Madhumithaa Venkatesalu, is the First Prize winning story in the senior category of the second biannual Short Story Contest 2016.

It was a Wednesday when Papa finally came home, and he brought with him news. This news proved to be quite overdue; as Ayub knew that Papa had been expecting this moment for years. It was finally time for them to leave.

Ayub sat in his room, having mixed feelings about the whole ordeal. Papa asked him not to pack much, so he didn't. He proceeded to put everything into a backpack meant for the first day of school that never came. But Ayub did not mind waiting. It was what he had been doing his entire life.

When Papa finally packed everything, they walked outside, handinhand, two lonely silhouettes in a silent town where people stayed locked up in their houses.

“They're afraid.” said Papa, looking at Ayub. “They're too afraid to live in a world unlike our own.”

“What's it like?” Papa echoed, and abruptly halted in his steps. When spoke again, his eyes shone.

“Imagine... Imagine a world where don't have to be scared of anything.” A pause. “You can go to school as soon as we get there, and you'll learn wonderful things. Things I never had a chance at learning.” Papa grew solemn with the last sentence, but smiled at his son when he looked at him with worried eyes.

Ayub returned the smile, and skipped alongside his father, any hint of previous reluctance erased from his mind.

Standing there in the midst of inferno itself, dressed in his camouflage jacket and combat boots, Private Malcolm felt incredibly uneasy. A cluster of mixed feelings coalesced into a big knot, and sat tight at the pit of his stomach.

Although severe bouts of nostalgia and embarrassment hit him from time to time, these were things he could deal with. What overshadowed these feelings entirely was a strong sense of regret, the feeling that he had done something wrong. Fresh out of high school, and barely 18, Malcolm was similar to many other young soldiers.

He was readily sure that he wouldn't mind giving his life for his country in combat. But here he was, assigned to regulating refugee traffic out of the desert in a nation that wasn't even his own. He scoffed. He glanced down at his uniform, where pools of perspiration had gathered at the pits of the arms. There was nothing heroic at all about the current situation. He let out a sigh, and looked ahead, on guard, for an enemy that never seemed to come.

As soon as they had reached the desert, it was so unbearably hot, that Ayub was told to lie underneath the dingy little mattress that Papa wheeled. He lay there for hours on end, staring mindlessly onto the underside of the mattress.

Hours stretched into days, and soon time was immaterial. Papa would hand him a piece of bread every once in awhile, and it grew stale with time. Soon the bread was like cardboard, but Ayub took it, without complaining. He was given water too, warm tasteless water that Papa said not to waste. He was always careful to not let it trickle down his lips.

But Ayub was happier when night rolled around. Him and Papa lay underneath their mattress, sheltered from the cold of the desert night. Sometimes his father whispered to him stories of faraway fairies and angels, coming to rescue them. They'll come soon enough Ayub. And when they do, take their hands, and don't look back.

Ayub waited for days, but nobody came.

Malcolm knew, within a week of his stay, that it was the heat that would be the death of them. Ripples of intolerable heat pulsed through the air, each wave more compelling than the last. The air was painfully dry, and saturated with sand, and each breath set fire to his lungs.

On a particularly hot day, an entire line of soldiers, including a couple of refugees, had passed out. The head sergeant had tossed all the unconscious people onto a pile. “They'll eventually come around.” he had said.

And most of them did. But others were not as lucky.

This terrified Malcolm; he had come to war to fight. That was what he had been trained for, anyway. But these were horrors his juvenile mind had never anticipated. His heart pounded, and he quickly opened his tent to get a breath of fresh air. The sight outside made stop in his tracks.

The sky was streaked an incandescent orange, an image so incredibly striking, but only ephemeral. As he looked up in awe, he noticed how ironic it was that something could be so beautiful, when everything around it was dying.

It is around midday when Ayub wakes up to the sound of a thousand people talking at once. Trying to stifle a particularly wide yawn, he stirs on the bottom of the trolley, trying to identify his surroundings. Then, it hits him. They are here.

He lies silently like that for a moment, his arms bent at an awkward angle; his legs are straight. The prospect of a new life is now so overwhelmingly close. He wonders if he should get up and tell Papa that he is awake. He decides not to.

The weight of the mattress above him is no longer smothering, as it had been earlier, but feels rather reassuring. He feels the cart being wheeled in, feels every ridge and bump on the surface of the ground, but he keeps as silent as the night. He holds his breath, and waits. His chest pounds with a terrific intensity.

A foreign male voice says something Ayub cannot understand, but he can tell that the man is young, probably not long ago a teenager. Papa wheels the cart in.

The air inside this tent is thicker, and it hangs upon them like a cloud. Ayub cannot see anything, but he can sense Papa's excitement, after all, it runs in his own veins.

After what seems an eternity, there is a voice, and Ayub thinks they are granted permission to proceed. But then, a distinguishably different voice interrupts the other, and soon there is an argument. Ayub is so confused, and he strains his ears, what is Papa saying?

Malcolm turns to Corporal Williams, who sits chewing the tip of his pen. His superior looks indifferent enough, but there is a glimmer in his eyes which suggests that there is more to it than that.

Malcolm is watching ever so closely, as the Corporal makes his way to the man. The man softly nudges the Corporal away, muttering something in the local language. In a flurry of motion, he does not realize what is happening quickly enough, and a single gunshot rings out. Then another. Malcolm is crouching to the ground, with his head between his knees, but when he looks back it comes not from the local, but from the Corporal himself.

The local is on the floor, dead. In a single movement, the Corporal shoves the mattress out of the way. Underneath it is not a bomb. In fact, it is not a weapon of any kind. It is the last thing the two soldiers are expecting.

It is a child, no older than seven. His expression is that of a wounded animal's; his lips open in a silent scream. The Corporal is at a loss for words, and Malcolm breaks down.

He whispers to the child, “I'm sorry, I'm sorry, I'm sorry,” over and over again, but it's too late. Malcolm thinks back to a quote he has heard before, 'those who have seen war will never be able to stop seeing it', and he wonders how much longer this image will plague his mind.

As time goes by, he knows that he will eventually forget it, but the boy never will. The boy looks on, his eyes glued to his dead father's face, before another soldier gently grabs his arm. The little boy lets the soldier take him, and for one last time, he turns around and his eyes flit over the men who killed his father.