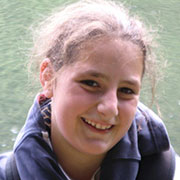 “The rainbow family” by Marta Formisano, is the Third Prize winning story in the sub-junior category of the second biannual Short Story Contest 2016.

Once upon a time, there was a family, the Rainbow Family, who lived in a wonderful coloured house in the clouds. Every room in the house was coloured, and every person had a different coloured room. You could see the house in the sky because it coloured it and made a beautiful rainbow. When the family members wanted to go out, they slid on the rainbow colours and landed on the Earth.

The family was composed of the father, Mr Brown, the mother, Mrs Purple, and a lot of children: Pink, Yellow, Orange, Red, Blue, White, Green, Grey, Light Blue ... except Black.

One day Pink cried, “Colour has disappeared!” Colour was the Rainbow Family’s dog, and he had disappeared!

Black was the enemy of the colours. He hated the Rainbow Family.

The Rainbow Family went to a secret laboratory that was on a cloud near their house. Everyone transformed themselves and they became the Super Rainbow Family. They were going to save Colour! They went to Black’s house: it was all dark and black. There weren’t any windows, because Black hated the light and he was afraid that with the light of the Sun, of the Moon and of the stars, he would die.

“Hey, come and see! I found Colour!” Orange shouted from the living room. The other members of the family ran to Orange and they discovered that the poor dog was trapped in a little black cage. He was now barking loudly. At that moment Black appeared.

“You are not going to free Colour, because I put a special black dust on the cage. It can’t be opened.”

“But our magic-colour is going to stop you,” Pink said with courage.

Each member of the family chanted, “Rainbow Colours! The light is going to break the dark!” Soon, the Rainbow Family coloured the dark room, and, all the light of the Sun went in that black room and eliminated the dark.

“No!” Black screamed as his body began to change. Now his body wasn’t so dark anymore, but it was all coloured!

“Hi everyone,” he said. “I’m the king of the colours, my name is Magic Light”.

“Yes,” the king answered, “A bad witch transformed me into Black a long time ago because she wanted to have the light of the Sun and I didn’t give it to her.”

“But what about Colour?” Yellow remembered.

“I will do it,” the king said and he uttered a magic spell. The cage opened and Colour went outside barking happily. Now the Rainbow Family and the king Magic Light live happily ever after in Sun village and they enjoy the colours in the world.

And they are planning to find Night, the witch who transformed the king into Black, and finally kill her.