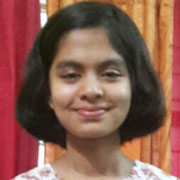 “The mango tree” by Soumya Deouskar, is the Third Prize winning story in the junior category of the second biannual Short Story Contest 2016.

I was sitting in the garden with my hands crossed and staring at the sky. The wind calmly blew, and reminded me of an incident, the enchantment of which resurrects and forces me to wear a smile every time I think about it...

Mr. Venkat Reddy, the most infamous man in our colony was known for his harsh and cold words. He was an old man, in his late 60s. His face was completely covered with wrinkles and hair almost faded to grey. He usually appeared with his black coat and half-rimmed spectacles on. Even a blooming flower would shrivel whenever he crossed. I still wonder what made my fate be against me as Mr. Reddy turned out to be my next-door neighbour.

Being the neighbour of his, I got enlightened about many of his untold and unsung stories, one of which described his undue obsession for his Mango Tree. I learnt that the only thing dearest to him in the whole world was his beloved mango tree,and it remained a mystery why. Nobody dared to touch it. And undoubtedly, the tree beamed magnificently, for it was grown with immortal and eternal love.

One morning, he came banging wildly on my door, “Have you seen anybody stealing my mangoes?” he said fiercely, his eyes were a ball of furious fire and rage. I barely could believe my ears. How could anybody steal his mangoes? I doubt if anybody has that much of courage. “No sir,I saw nobody.” I replied in a shiver. He stood there for some moments or so, scratching his chin, deeply unsatisfied with my answer. He returned to his house,with an irritated and restless mood.

I vividly remember the next day’s sunless and pleasant weather, because of which I made up my mind to sit in my garden. The air was carrying the aroma of petrichor that immersed me. Suddenly I heard a strange rustle from Mr. Reddy’s house. I saw a boy nearly 10 years old climbing the mango tree. His face was covered with dust and his hair were all messed up, his eyes were glittering with the reflection of mischief of his childhood. I grinned when I saw him but my smile melted away when I heard Mr. Reddy shouting, “I found you, little boy!”

In a hurry, all his mangoes fell on the ground and yet he failed to run out of the house. Mr. Reddy came running but then he paused, everything fell silent, instead of planting a slap on the boy’s face, he picked up the mangoes and gave them to him. I just couldn’t decipher what was happening that moment which left me spellbound. But when I looked into Mr. Reddy’s eyes, he wasn’t staring at the larcenist but the younger accomplice that I assumed was the boy’s brother, peeping through the gate as if eagerly waiting for the mangoes. I could clearly see the love for the fruit in his twinkling eyes. Mr. Reddy gave the mangoes, patted him and waved him a goodbye.

When he went inside, I followed him through the window. He took out a photo frame out of his wooden time worn cupboard and gave it a warm, tight hug. I saw that it was an old tattered black and white photo of two little boys laughing with intense happiness and eating mangoes.