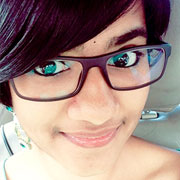 “The day I was reborn” by Akshatha Kamath, is the Highly Commended story in the senior category of the second biannual Short Story Contest 2016.

The day I was reborn

These days it’s loneliness that follows me instead of my shadow. I spread my arms out wide, but there’s no one to hug. The fire inside me does not seem to cease, the fire of love, pain and regret. The darkness is swallowing me bit by bit. I want to cry but the tears seem to be holding themselves back. I had inextricably messed it all up.

It was a rainy night. I tottered down the path. I returned home a few bottles downed in me as usual, at midnight. I could see the lights still on. My mother was still awake. “Go get some food old woman”, I yelled at her. She rushed to the kitchen as quickly as her old legs could take her and served me food. She silently stood by the wall watching. “There’s no salad on my plate. How many times do I have to remind you?” I lost my temper. She mumbled her apologies and hastily went to the kitchen, but I was in no mood to wait. Alcohol had possessed the better of me. The monster in me followed her. I grabbed her by her hair. In the usual bouts of violence I beat her. I pushed her away and she fell straight down on her head. I was about to leave home when she said “wear your mackintosh child, it’s pouring outside”. I paid no heed to her.

Four hours later I returned back home, with a vague recollection of what had happened. With the monster in me left far behind, I stumbled past the door and hoped she was alright. I called out to her but there was dead silence around. The silence was deafening. The neighbours came into the house and told me that she had been rushed to the hospital. I was frantically searching for the car keys when I saw a flashing light across the window. It was a hearse van. Grief penetrated deep into my heart. I was a murderer. She lay before me cold and pale. Realisation struck me. The police would arrive and put me behind the bars. I would have to spend my entire life in the man-made hell; a death sentence would be better. Just then I heard my neighbour-“poor lady, she told me she had tripped down the stairs and injured herself. I’m sorry she couldn’t make it”.

22 years back my mom had opened my eyes into the world and today again she had gifted me life. A man held out a piece of paper to me.

To my son I bequeath all my assets, all my property.

I dropped to the floor, tears streaming from my eyes. Crying, sobbing I stared at her corpse. She lay there pale and cold. The red scar on her forehead stabbed my conscience. She had held my hand through my ages. She had raised me through hardships and had walked my first steps with me. A small scratch on my hand would tear her heart apart. The poor woman had got nothing in return of her kindness. My dad used to abuse her and I had followed his legacy.

I held out a bottle of poison. I didn’t deserve to live. I took a deep breath. Just then, the doorbell rang. I sprinted to the door with a hope that my mom would be standing there with a cheerful smile as ever. A group of kids greeted me. I was about to slam the door but their innocent faces reminded me of my mom. I chose to listen. They handed me a blue piece of paper:

There are 1 million needy elders waiting for your help. Support the aged. Let’s make their life colourful. Someday and sooner than you can imagine you are going to be old too.

I had found a purpose in life. My death was too small a thing to offer in return of her sacrifices. I chose to offer my mom my life…….

Suddenly, I heard applaud. Everyone’s eyes in the auditorium were fixed upon me. A man on the mike spoke out loud, “I showed my son the world and he showed me an old age home but here’s a man who has donated all his wealth and property so that we could live and we could die in peace. He has decided to be a volunteer for life at the St. Theresa’s old age home. May God bless every mother with a son like him”.