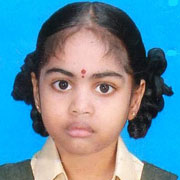 “The Angel Sparrow” by G. Dharshini, is the First Prize winning story in the sub-junior category of the second biannual Short Story Contest 2016.

There was a small banyan tree near a pond in Allithurai, a village in Karnataka, in India. About fifty sparrows nested in that tree. Monal and his wife Shalu were among them.

One day, Shalu laid an egg. Monal became very happy and excited. After a few days, the egg hatched out. All their friends came to congratulate the couple, but they found Mr. and Mrs. Monal weeping.

“Why are you sad?” asked one of the friends.

“You come and see my baby!” said Monal.

All the sparrows visited the nest and they were shocked. The baby sparrow had only one wing!

An old sparrow suggested, “Push him down and kill him immediately! Who can take care of this chick?”

Shalu said firmly, “Dear uncle, he is our baby. We will not kill him. We will feed him as long as we live.”

The next day onwards, Monal and Shalu collected insects and fed their beloved baby. They called him Sonu.

When Sonu grew up, he was able to jump from one branch to another although he could not fly. He never tried to go down to reach the ground because it would be impossible for him to climb up again. During the daytime, he was alone on the tree. He spent his time watching fishes in the pond.

Sonu was sad whenever he saw the other sparrows playing and bathing nearby. However, he always appeared happy.

One day there came a little squirrel under the tree.

“Where are you from?” asked Sonu.

The squirrel said,” I am from a far away village. My name is Mangu. O, why are you staying alone?”

“I have only one wing,” Sonu replied.

The squirrel said, “I am sorry. What is your name?”

“Sonu,” he said. “Are you also lonely Mangu?

“Yes, my family and friends died in a flash flood last year. I am on my way to my relatives far away.”

“What is flash flood?” Sonu asked.

“Sometimes during monsoon, huge flow of water comes suddenly. It is called a flash flood. Our burrows were flooded by it. I had warned my relatives. But nobody listened to me.”

“How could you warn them?” Sonu was surprised.

“I observe nature. Why can’t you pass time studying nature? For example, if you see the western sky red during sunset, there may not be rains for a few days. If you see the leeches come out of water there would be a storm soon.”

“Foolishness! How can leeches know of storm?”

“Leeches come out for easy breathing when the air pressure becomes low. There are many such things nature can teach us.”

Sonu wondered at the wisdom of Mangu.He thanked him for sharing his great knowledge.

The next day onwards, Sonu studied nature. He observed the sky during sunrise and sunset. He watched the ants on the branches. He studied the habits of fishes in the pond below. His knowledge increased day by day.

Soon, he could predict the exact date of the start of monsoon by the appearance of the western sky. His parents and other sparrows were surprised at his wisdom. They loved him all the more.

One day, the rain stopped and the morning appeared very bright. All the sparrows left home happily. But by the end of the sunny day the leeches came out of the pond and climbed on the bushes. Sonu was frightened. When his parents came back at sunset he warned, “There will be a great storm soon. Please find shelter somewhere else.”

The news spread and all the sparrows believed him. But Shalu said sobbingly, “How can I leave you alone, son? I will remain with you.”

“No, my dear mother! If God wishes so, I will survive. Please save yourself.”

Monal and the other sparrows advised her and at last, she flew away with them to a cave in the hill a mile away.

By midnight, there started a very powerful storm and heavy rains. All the sparrows in the cave prayed for Sonu’s safety.

In the morning, everything was calm. The sparrows anxiously returned to their place.

The mango tree had fallen down. Sonu was to be not seen. The sparrows wept. One of them said, “He was an angel who came down to save us. He must have flown back to heaven.”

“O Sonu, you never die,
In our heart you ever stay.”

Even to this day, the sparrows in Allithurai sing the same song.