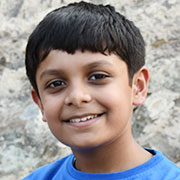 “Fear no more” by Jayanth Ramganesh, is the Highly Commended story in the sub-junior category of the second biannual Short Story Contest 2016.

Jeffrey looked up from his comic book at the clock. It was almost 8 p.m.!

His father was still at work. His mother and his little brother had gone to the grocery near their home. He had refused to join them, preferring to sit at home with his favourite comic.

He sighed and started reading again. Just then, all the lights went off.

He froze in terror! He was extremely scared of darkness!

Normally even during daytime, he would not go to the next room without switching on all the lights. But now, he was stuck all alone in a dark house, at night time.

“I should have gone with mum. What would I do now?” he shivered and crouched in his chair, his head between his legs. The seconds passed like hours.

“Oh! But there is a flashlight at home”, he remembered.

But there was another problem. It was in a cupboard in another room. How would he able to get there? He started whimpering aloud.

But he had no choice. Still very scared, he inched forward very slowly on wobbly legs and finally reached the cupboard. He groped inside the cupboard and grabbed the flashlight from the shelf. He fumbled around for the on/off switch and finally switched it on. ‘What a relief to have some light’, he thought!

Almost immediately, he jumped at the sight of the monstrous shadows painted on the wall by the flashlight.

Involuntarily, he quickly switched the flashlight off. Once again, he was in total darkness. He didn’t know that having some light could also be scary. The shadows cast by the flashlight reminded him of the evil monsters he had read about in story books.

“Which is more scary?”, he thought. “Complete darkness or having light? If both scare me, I don’t need any of them. I don’t have any option but to choose one of them.”

Saying so, he started to switch the flashlight on and off.

Observing the darkness and later the shadows caused by the flashlight, he realized that darkness was not scary after all. The darkness enlightened him with a new thought – “Fear does not come from outside. It actually comes from the mind.”

He switched off the flashlight and said aloud to himself, “I promise I will never be scared of darkness again, in my whole life.”

When his mum and his little brother came back from the grocery, they were surprised to see Jeffrey sitting calmly in the dark house.

“Jeffrey! I am so surprised! I thought you would be scared of the darkness. So we hurried home without actually finishing my grocery shopping. How come you are sitting alone in the darkness so bravely?” asked mom.

“Fear does not come from outside, mom. It actually comes from the mind,” said Jeffrey very calmly. He was proud to see the expression of pure surprise on his mom’s face by his show of courage.

At that moment, the electricity was restored.