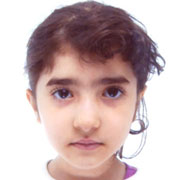 “Fairyland!” by Mariam Asali, is the Highly Commended story in the sub-junior category of the second biannual Short Story Contest 2016.

That day I was playing outside with my friends.

Then we spotted something in the bushes.

Something small and beautiful. It was… a fairy! I was so excited. I picked it up.

“I live in fairyland.” she replied

“But where is fairyland?” I asked.

“I can take you if you want. Just follow me,” she replied.

She led me to fairyland. We slid down the rainbow. We found ourselves in fairyland! And it was…like a dream! There was rainbow trees and pink nests in the trees, there were cotton candy couches and lots of different creatures!

The rainbow was colorful but suddenly the colors went and it all became black. We were Shocked and asked her “What happened where are the colors?”

“A scary witch who was taking over fairyland and her followers. They are looking for the red jewel which protects us from them. If they found it, all will be dead.”

She continued “We have to beat them or else.”

“Then let’s go; what are we waiting for!!!” I screamed. Then we saw the bad fairies. We followed them into their castle. The castle was made from fire.

Then they turned and saw us behind them. After that they were making wind to blow us away. The wind almost blew us. And we said we can’t survive it anymore and please we need to get to fairyland.

We went back to fairyland. But the bad fairies followed us after we left they said you can’t beat us. So we fought. We almost won but the strong wind blew us. Then they were fighting with us. So we had to tell them about the magic jewel to let us go. We told them that the magic jewel is in the deep dark cave.

They left us and went to find the magic jewel. We tried to stop them but they were faster than us. We went into big caves. Dark woods. And then they found the place of the magic jewel. But nothing was there. They began fighting.

Then I screamed “stop this fighting we should be friends whatever happened in the past to make you fight, forget about it, be friends with us and we will share fairyland.” The bad fairy replied: “make the good fairies promise they won’t fight us again like in the past.” the good fairy nodded “We promise!”

They were all friends. We went to fairyland then I asked, “May we go home?” The fairy laughed “Of course but I want to reward you and your friends something.” she pulled something out of her pocket. Three necklaces in different colors “If you touch the necklaces and whisper: ‘sunshine,’ you will turn into fairies and you can come here again.”

They went home. And wrote about their adventure.