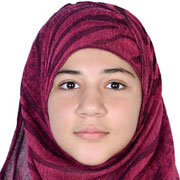 “Escape” by Huda Ali, is the Highly Commended story in the junior category of the second biannual Short Story Contest 2016.

There was excitement in the air. The impatient crowd waited for the show to begin. The ringmaster’s voice echoed across the circus ring. I, the powerful, golden, circus lion, was forced to heave myself up and start the difficult routine of dashing through tunnels, standing on hind legs and leaping through flaming hoops.

I had been performing in this circus for as long as I could remember, and I didn’t like it one bit. It made my head throb and my back ache. But there was nothing I could do about it.

Suddenly, I spotted something that made my heart leap. In a part of the enclosure where I was imprisoned, a couple of wires were out of place. The rest of the bars had become unstable due to this fault in the cage. My eyes widened, and then narrowed as a brilliant scheme formed in my mind.

I hesitated, then with a mighty roar, bounded across to the enclosure wall and burst through, leaving a massive hole in the wall. There was complete uproar as the place broke into chaos. The ringmaster shouted orders on his microphone while screams of terror echoed all around. The audience remained frozen in their seats as I leapt across the heads of the astonished and terrified crowd, thoroughly enjoying this sense of freedom that I hadn’t felt for many, many miserable years.

I leapt onto the road, growling ferociously, but panicked as I caught sight of the terrifying creatures called cars. The wail of a police siren started close behind me. Rushing ahead, I disappeared in the pandemonium and leapt across a high wall, my golden mane flying in the wind. Landing on the other side, I looked around and found myself in a vast garden filled with rose bushes and tall trees. On the far side of the garden, I could see a massive, old house. Panting heavily, I crouched in the undergrowth. They would never find me here.

The sky grew darker and darker, and after what seemed like ages, I cautiously raised my head and peered over the thick row of bushes. Seeing that the coast was clear, I padded noiselessly over to the boundary wall, and leapt over it once more.

I was off to search for food. I noticed that there weren’t so many cars on the road as before. Keeping in the shadows of the walls, I crept along the side of the road. I didn’t know where I was going, or where I would find food. I just kept on going, stopping occasionally to avoid passers-by wondering why there was a slight movement on the sidewalk.

Suddenly, the light of a street lamp revealed me hiding in the shadows. People stared at me, open-mouthed and wide-eyed, and I remained frozen on the spot. I noticed a person in uniform pointing a gun at me. Too late, I realized that a tiny object was whizzing through the air, shooting towards me...

When I opened my eyes, I found myself in a cage. Why would I be in a cage? Hadn’t I escaped? And when had I fallen asleep in the first place? Then it all came back to me. I had been shot by a tranquilizer dart. It didn’t hurt much, but the shot put me into deep sleep.

I stared around the cage once more, my heart sinking. It was a small cage, kept in a dark place which looked like the back of a truck. I was being taken back to the circus. I just knew it. My tail lashing indignantly, I tried to struggle free, to somehow break the cage. But there was no escape.

Finally, with my tail between my legs and a falling spirit, I wondered why humans had to take freedom away from us animals, why they trapped us in cages and made us learn tricks that were not in our nature, just for their own entertainment. All I could do was hope that humans would, one day, realize that all animals have rights and deserve freedom in their natural habitat.