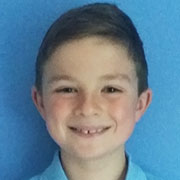 “Brian’s leprechaun adventures” by Pearse Conway, is the Highly Commended story in the sub-junior category of the second biannual Short Story Contest 2016.

Hi, my name is Brian Hardman. I live in Wexford, it is very sunny. Let me tell you one of my most exciting adventures.

One St. Patrick’s Day, I was with my friend Bill, we were strolling through the woods near our village when we saw a Leprechaun. He was a strange looking creature. He had a green hat, a green t-shirt and coat, a belt and gold buckle, but the strangest thing he had was purple hair.

Bill said, “I wonder if that Leprechaun is good or bad?”

I said, “Come on let’s follow him and find out.”

So Bill and I followed the Leprechaun. We saw a small entrance which led to Leprechaun Land. Firstly we saw a rainbow to slide down and then a Bungi jump shaped like a shamrock.

I said, “King, sir, we just wanted to see what that strange Leprechaun with the purple hair was doing.”

“Oh, that is Jinx, he is a bad Leprechaun, my apologies,” said the King of all Leprechauns.

I said, “That’s the only reason we have come to the Land of Leprechauns.”

Bill then asked, “Can you help us get back to the real world, back to where we live in Wexford?”

“That should be no problem,” answered the King of all Leprechauns, “but first, I must tell you my name, it is Larry.”

Bill introduced us to the King.

All of a sudden, everyone started running while shouting, ‘HELP, HELP, Moodfunk!’

Larry said, “A Moodfunk takes you to his den and takes all your good moods and only gives you bad moods. We need help!”

After precisely one minute, I came up with a brilliant plan. “What if we all went into that cave over there, it would be a great hiding place!”

A servant and a maid of the King’s, who had come along said “Yes, Brian, that is a great idea, come on your Majesty Larry!”

Soon the town’s people were safe in the cave. I checked outside a few minutes later and the Moodfunk was gone – how everybody clapped and cheered! Now Larry could show us our way home. In no time at all, we were back in our forest. So Bill and I scurried back to the parade, after our great adventure.