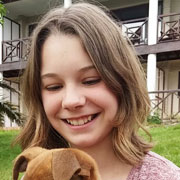 “A friend” by Jody Futter, is the Highly Commended story in the junior category of the second biannual Short Story Contest 2016.

I jumped off the porch, careful not to break my tea set. I ran through the long thick yellow grass. The wind caught my hair, blowing it wildly. I felt the tips of the grass brush against my fingers. Feeling the wind against my face, my knee length pink silk dress flapping around my legs. I skidded to a halt at the edge of the pond and lay my tea set on the ground next to me. I lifted my arm up and closed my hand into a fist. I looked down at my tea set, and back up. I smiled as everything started to get bigger and we got smaller. Once I was about teacup size I opened my hand, stopping my shrinking process. I picked my tea set up and jumped onto the lily pad nearest to me. It rocked slightly as it took my weight. I jumped to the next one.

Once I got to the other side of the pond I set my tea set on the flat rock embedded in the bank. I set my blanket, teacups and teapot out. I sat down and put my hand in my little basket again, but pulled it out upon hearing a noise. I heard it again; it was some kind of cracking noise, like a branch cracking.

“Who’s there?” I asked A frog, standing on his hind legs, walked out. He was wearing a waist coat, a bowtie and what looked like tapping shoes. He straightened his bowtie and looked up, smiling.

I smiled back “Would you like to join me for some tea?”

“That would be lovely!” he said walking over

He sat down crossing his legs, and I handed him a teacup. I pulled my flask out of my basket and opened the lid. Then I poured it into the teacup putting the flasks lid back on. I put the flask back and put the teapot lid on the teapot. The frog grinned at me and I grinned back.

“I had to keep it warm!” I protested

I poured tea into his teacup and into mine, and then put some sugar lumps in each.

I sipped my tea and he sipped his. We introduced ourselves and we drank some more of our tea. Then we started talking about our lives. Apparently Ernie (that’s the frog) used to be used for science experiments, until he escaped and travelled here. He is now part of a jazz band at the Wooden creak, some sort of pond concert center. We talked for a long time, and slowly it started to get dark.

From somewhere in the distance I could hear music. Ernie seemed to hear it as well, because he had lifted the side of his head, as if he could hear something.

“Say, would you like to join me in going to the Wooden creak now?”

“That would be lovely”

So we walked and hopped to the Wooden creak. It was just another pond, but with so many lily pads and small animals. There were grasshoppers, frogs, small turtles, hedgehogs and chameleons. The funniest thing was that they were all dressed. They all wore different clothes, some wore pants with no top, some a top with no pants, some both, some had just waistcoats, but they all had shoes, similar to Ernie’s. They were all dancing, except the ones at the bar and the ones on the stage. Right now, the band was just finishing the song ‘What a wonderful world’. Ernie walked me over to a table.

“My band is going to play now, stay here or dance, or whatever”

I nodded and smiled.

He walked up onto the stage and announced that they were going to sing a song called ‘Work song’. Then they started; everyone, it seemed, turned their attention to them. Ernie was the one who sang. He was so good, I had to say. And his shoes were tap dance shoes, because he used them as an instrument. I got up and started to dance. It was so much fun. I had a friend, finally!