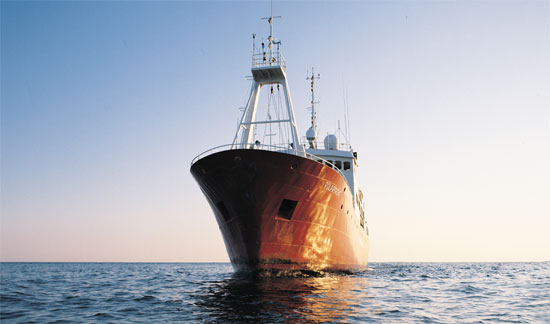 Once a twelve year old boy was travelling around the world by sea, with his father who was the captain of their ship. Now, the ship was sailing home at last.

It was a pleasant day. All the passengers were on the deck. A monkey was entertaining them by showing funny faces. It became progressively naughtier as more and more passengers gathered around, enjoying its gimmicks.

Suddenly the monkey ran towards the captain's son and snatched his hat. Then it proceeded to put the hat on its own head. Soon after that, it climbed up the mast. Everyone laughed, but the boy was not sure whether to laugh or cry. It had come as a bolt from the blue.

The monkey perched itself on the first cross beam of the mast, took off the hat and began to tear it. It teased and made faces at the boy. It was just too much for him. He shouted, "You horrible creature, return my hat or you are going to pay for it." The crowd laughed louder and the boy turned red with anger. He went after the monkey on the mast. The monkey continued to climb higher.

"I am not going to spare you," the boy yelled, as he continued to climb higher and higher. Finally both of them reached the top of the mast. The monkey stretched itself to its full length and hung what remained of the hat on the end of the yard arm. Then it climbed to the very tip of the mast and sat there, mocking the boy.

The distance from the mast to the yard arm, where the hat hung, was about two yards. To reach the hat, the boy would have to let go of the rope and the mast. He was not bothered about the danger involved, as his mind was focused only on getting the hat. Everyone on the deck froze with fear when they saw that the boy had stepped onto the spar without support. One wrong step would send him dashing on to the deck and to certain death. Everyone waited to see what would happen next. But someone from the crowd cried in panic. This startled the boy to his senses. He looked down and began to teeter.

Just then the captain of the ship came on deck. He was carrying a gun to shoot sea gulls. In their excitement no one had remembered to call him till then.

The captain stood still upon seeing his son on the mast.

Then he aimed the gun at his son and shouted, "Jump into the water or I will shoot you. One, two, three…"

Everyone held their breath. Will the boy trust his father enough to jump into the ocean?

The captain walked to his cabin with dignified steps. Once he was in, and closed the door, he burst into tears. He had come very close to losing his only son. With great presence of mind, he had made his son leap into life, instead of falling to his death. For his son, it was a leap of faith: faith in his father, that made him jump into the ocean at his command.

« Back to MenuNext Story: The Little Girl And Mushrooms »