Short Stories » A lesson for Jack and Dane

A lesson for Jack and Dane

Jack and Dane were great friends. Every evening they played together. They studied in the same class in the same school. They were good students.

One evening, Jack and Dane were playing with a ball. After a while, Jack said, “I am so bored. Shall we go for fishing in the river?” “That is a great idea,” replied Dane.

Jack called out to his mother,” Mama, we are going fishing in the river, okay?”

“Okay,” Jack’s mother said, “but be careful not to get into the water. Your father said there are crocodiles in the river.”

Both the children said that they would not get into the river. They gathered their fishing lines with the hooks, and a can full of bait. They strolled to the river, and soon began fishing. 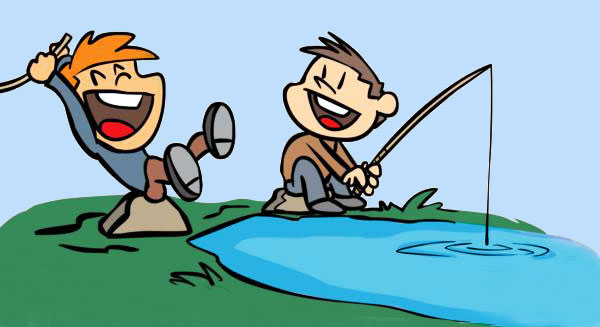 However, even after a long time, they did not get any fish. They began to feel bored again. “This river looks not so deep. Why does mother say not to swim here?” asked Jack.

“Remember, your mother said there are crocodiles here,” said Dane.

Dane was quiet for a while. Finally he asked, “Do you think we can swim?”

Jack jumped up and shouted excitedly, “Yes, let us swim. Come on, dive.”

The two friends dove in, and splashed around happily. They found some logs of wood floating on the river, and tried floating with them. It was then that something unexpected happened.

Dane was playing with a log of wood, and suddenly, the log was caught in a strong current, and he was hit in the head. He became unconscious immediately.

Jack saw what happened, and he swam fast to his friend’s rescue. However, Dane was too heavy for Jack to drag to the shore, so he shouted for help.

“Help! My friend is drowning.”

At the same time, he saw a movement a little far away. He realized he was looking at a crocodile and was terrified.

He began to panic and to cry. The crocodile was going to get them any moment.

Suddenly a loud splash was heard. Jack looked up to see his father and mother in the river, by his side. In a flash, they got both the friends to the shore.

They sprinkled some water on Dane’s face and brought him back to consciousness, but he was very weak. Jack was too shocked to speak. He felt very guilty. Finally, he stammered, “I am sorry, father. I will listen to you and mother in the future. Promise.”

The friends learnt a lesson.

Moral: Children who disobey their parents will get into trouble.

« Back to MenuNext Story: The Hungry Mouse »