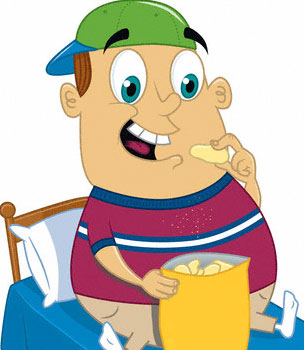 Nicky was Sonu’s cousin. He was a fat boy. He could never control his hunger. His mouth always appeared to be a grinder, constantly grinding away. He was always eating or drinking something. His uncontrolled craving for food made Nicky gain a lot of weight. He decided to spend some time with his cousin Sonu. It was a short holiday for Nicky and he urged his parents to send him to Sonu’s home.

Sonu and his parents received him happily but were very shocked to see the fat and big Nicky! Although Nicky was just a year elder to Sonu, he appeared to be 5 to 6 years elder. Obviously, Sonu started to make fun on him. It was Sonu’s nature to try and see the funny side of any situation.

Sonu helped Nicky to cut down his food intake. Sonu’s family cooked Nicky healthy foods. However, Nicky was so sad that he couldn’t lose weight. Sonu came up with an idea to help Nicky lose weight. Sonu told him, ‘Nicky, one of my school seniors had an overweight problem similar to yours. He bought a weight loss book, followed all the instructions, and finally lost lots of weight. Would you like to try it?’ Nicky was only happy to try it. They met Sonu’s senior and asked for the book. Unfortunately, his senior gave away the book to his neighbor. He told him to buy a fresh copy, which was available at the bookstore.

They rushed to the bookstore, but could not find a copy. They searched at many bookshops, but that specific weight loss book was out of stock. Both were very tired and went back home.

Next day, they decided to hunt the remaining bookshops in the town. Finally, they reached the last bookshop. They enquired about the book. The shopkeeper felt pity on them because the last copy that he had was sold just a few minutes ago.

Sonu thought for a while and asked the shopkeeper whether he has any book on weight gain? He said yes.

Nicky was confused! Sonu told him, ‘Come on Nick, you can read the weight gain book from reverse so you can lose weight!’

That was very funny!

Nicky finally joined a fitness center and worked out a lot to lose his weight. Now that is a different story.