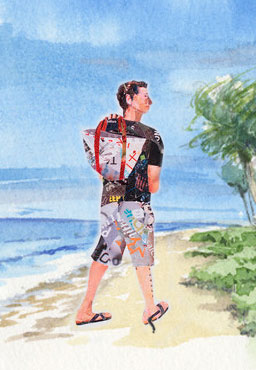 A Lame Man is a short funny story about how hastily people come into a conclusion without thinking. Just plain hasty decisions!

Two men were walking on the beach. They were having a conversation about health, children, education, etc.

They argued for some time, but none agreed with the other. They decided to ask the lame man about the cause of his limping.

The first man said, ‘We have been watching you for a while. I told my friend that you were limping because you could have been born lame, but my friend argues that you were injured in an accident! Which one is true? Please tell us?’

The lame man laughed at them and replied, ‘I’m not lame. It is just that one of my slippers broke and I’m finding it difficult to walk on the beach!’

Kim and Tim were twins. They were labeled as the naughtiest brothers in the world. They were very mischievous. Worried about their future, their mother and father decided to send them to a priest hoping that he could correct their ways.

The priest told their parents that if they can impose the fear of god, they would change. Parents were happy. The priest asked them to send one by one so that he can have some conversation separately.

The priest talked to the elder one, Kim and asked him in a loud voice ‘Where is God?’

Kim asked the priest, ‘Are you going to ask my brother about God?’

Kim ran to Tim and shouted, ‘Tim, we are in trouble. God is missing, and everyone thinks that we are accountable for his disappearance!’

« Back to MenuNext Story: The Stranger in the Garden »