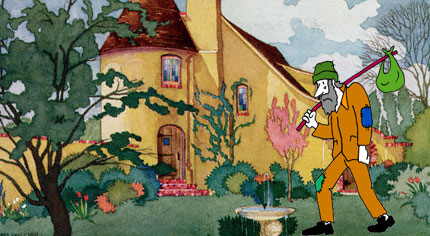 
When grandfather Wib was a boy, tramps often came to the back door to ask for a bite to eat. There was a railroad junction about a mile down, and tramps often followed the railroads and stopped for food at houses along the way.

Wib’s mother never seemed to be the least afraid of any of the tramps and always found something to give them, but she had one rule. They had to do some work for her before she fed them, and they always did it. It was surprising because, even the tough looking tramps did what they were asked to do. She said that the work was good for their self-respect. Wib did not understand what that meant, but the work part of it suited him fine. He was quite willing that all the chores should be done that way.

One day, towards the end of March, Wib had an argument with his cousins Ned and Shorty about tramps, on their way from school. It appeared that one of the senior boys had said in school that tramps who stop by at their place, leave signs that other tramps pick up. “Do you believe that?” Ned asked Shorty.

Shorty said, “Well, it must be so, because no tramp has ever entered their teacher, Missus Peale’s house for the last twenty years. Besides, she is too stingy to give away even a bread crust, and I am sure all the tramps know about that.”

Wib said that he did not believe that and wanted to know what such signs looked like. “I’ve never seen a tramp make any marks around our house, and you know, how many of them stop there,” he said.

He said, “I am glad that they stop there every now and then. All of them help me with my difficult jobs and I like them.”

That doesn’t mean anything,” said Shorty. “We are not talking of liking or disliking them. We are talking about the signs they leave.”

“Anyway, we shall wait and see,” said Ned. The old tramps should be returning soon, and we can then see, who is right.” Most of these tramps, go south in winter and return in spring,” he added.

It would be spring in about a week or two weeks’ time. They noted that snow had gone off in the open, except for places where drifts had been. They also noted that the brook would not get any higher. They stopped for a drink and walked up to Wibs’s house.

A delicious aroma came through the open kitchen window.

Ned said, “Aunt Ann is making us cookies, and they made a rush for the back door. They stopped to take of their caps, wipe their feet, and wash their hands.

All the boys knew that Wib’s mother was a great cook, and made the best things to eat. She made doughnuts and pies that would make any boy’s mouth water. However, cookies were here specialty. She could make a wide range of cookies, and the cookie box was never empty.

As the boys unbuttoned their coats, Ned’s mother placed the cookies in front of them. “I don’t blame the tramps for stopping at your house.”

Wib’s mother, Anne smiled and had a twinkle in her eye. She said, “Do you remember last year when I gave a tramp some raisin cookies?”

While Wib and Ned knew the story, Shorty had not heard about it. Therefore, Wib’s mother told it again.

First, she added some firewood to the stove, heated the room, and began. “About this time, last spring, a big burly tramp had stopped by and had asked for a bite to eat. I told him, if he could fetch a pail of water from the spring, I could perhaps rummage up something. And while he was getting the pail of water, I fixed him a big plate of raisin cookies. It was April Fool’s day, so she had put some cotton batting inside one or two of the cookies to fool the boys. Of course, the cotton would not be visible, once the cookies were baked. Somehow, those April Fool’s cookies landed up in the tramp’s plate. The big fellow was so surprised when he bit into the cookies, that I couldn’t help laughing.”

“So, what did the tramp do?” asked Shorty.

“Oh, he laughed too. Laughed so much that I thought the buttons in his coat would burst.” said Wib’s mother.

It made the boys laugh, just to think of it and Aunt Anne joined in. She always loved a good joke.

She gave them more cookies and an apple pie, and send them out to sit and eat by the back door.

“I have been thinking,” said Shorty. “What if the old tramp had got mad at your mother?”

“Oh, she is not afraid of tramps,” said Wib.

”I know that, but how do you identify which tramp is good and which are bad?” asked Shorty.

Wib got up, puffed his chest out, and said, “No tramp ever hurt a flea.”

His mother heard this and smiled.

There wasn’t much time for arguing. The boys had chores to complete before supper.

A few days later, Wib returned from school to find a rough, burly old tramp sitting in his mother’s kitchen. His mother was nowhere to be seen. The tramp then looked at him and said, “I am hungry. He sounded awfully gruff.

Wib mustered up all his courage, and said, “Mother always asks the men who come to ask for food to complete a little work for her, before she feeds them.”

The tramp said, “That’s just, but I cannot do it as I have rheumatism.”

Wib politely replied, “I am sorry about the rheumatism, but if you could just fetch a pail of water from the spring, I am sure she would be happy to give you something to eat.”

“Good for you, Wibbie,” and the tramp pullet off his hat and whiskers and coat, and there stood his mother. “April Fool,” and she began to laugh.

Wib ran and hugged her and they both laughed, until they cried.

« Back to MenuNext Story: The Dog from Nowhere »