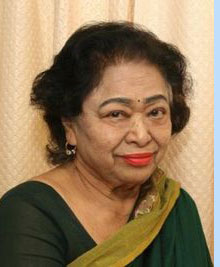 More than 40 percent of world’s population (kids, adults and even elderly) finds mathematics a difficult subject. We cannot live without maths isn’t it? There lived a woman, who breathed mathematics, enjoyed mathematics and had her life playing with mathematics. She is none other than SAKUNTHALA DEVI.

Sakunthala Devi, known more as ‘HUMAN COMPUTER’ is one of the renowned personalities in the world. She is famous for her knowledge and swiftness in mathematics.

Born in India, she was born in a poor family, to a circus and street artist. She accompanied her father who used to perform circus in streets. At a very tender age of 3 years, she had amazing knowledge on maths. Also, she mastered remembering the numbers using the card tricks. After understanding her knowledge in mathematics, her father made her a part of his daily street show. She did not have education in any superior school nor studied mathematical in Business schools. She effortlessly counted, multiplied, divided and subtracted numbers of lager digits.

Later, she moved to London with her father on pursuit of circus. She solved a complicated maths question 5 times faster than a computer.

Her talents in mathematics earned her a place in the Guinness book of world records in the edition of year 1982. She travelled almost all around the world demonstrating her mathematic skills, including a performance in USA in 1976 and tour of Europe in 1950. Her abilities were studied by Arthur Jensen a professor of psychology at the University of California, Berkeley. Jensen given calculation of larger numbers, including the calculation of cube root of 61629875 and seventh root of 170859375 which was easily solved by her.

Her flawless calculation and maths knowledge made her highly knowledgeable astrologer, who predicted accurate results on movement of planets and their efforts. She served as a personal astrologer for many celebrities in India and foreign nations. She was also a great writer, who wrote many novels and cookbooks.

She died at the age of 83 (21 April 2013) due to respiratory issues. She wasn’t recognized well for her achievements and intelligence.

A salute to this amazing personality who had incredible gift, a rarest of its kind!