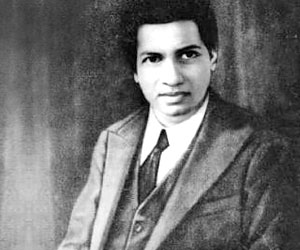 Srinivasa Ramanujan Ayengar was definitely one, if not India's greatest mathematical geniuses. He made significant contributions in the field of elliptic functions, analytical theory of numbers, and continued fractions. He was also recognized for his efforts in the area of continued fractions and series of hypergeometry.

Srinivasa Ramanujan Aiyangar was born on 22 December 1887, at Erode in the Madras Province of India to a poor Brahman family. His father’s name was K Srinivasa Aiyangar and his mother was Komalatammal. His father worked as a clerk in a cloth merchants' shop, and he went to a local school in Kumbakonam.

By the age of eleven, he had drained the mathematical expertise of two college students, who happened to stay as lodgers at his home. He later went on to master trigonometry by the age of thirteen, and discovered sophisticated theorems on his own. By fourteen, he had mastered the theorems of sine and cosine.

In 1903, a book on the Synopsis of Elementary Results in Pure and Applied Mathematics was of big assistance to him. It opened new dimensions, which enabled him to introduce over 6,000 theorems of his own. As he had no access to good and proper books, he had to figure out on the solutions for all the questions on his own. This search for new solutions helped him discover many tremendous methods and new algebraic series.

In 1904, Ramanujan received a merit scholarship at Government College, Kumbakonam and became more indulgent into mathematics. He lost his interest in all other subjects due to which he lost his scholarship. Even after two attempts, he did not succeed to get a first degree in the field of Arts. In 1909, Ramanujan got married. It was Ramachandra Rao, an eminent Indian mathematician, who helped him get his first job as a clerk at the Madras Port Trust, which gave him just enough for his basic living.

However, even while working as a clerk, he continued with his investigations of mathematics, and in 1911, published some of his results, and the University of Madras gave him a scholarship in May 2013. With the help of the founder member of the Indian Mathematical Society, Ramaswami Iyer, Ramanujan also managed to publish his work in the Journal of Indian Mathematical Society.

Having read and being influenced by the eminent Cambridge Professor, G. H. Hardy’s book, “Orders of Infinity, “Ramanujan decided to send his work to him, to get his views. G H Hardy, along with another renowned Professor, Littlewood, studied Ramanujan’s long list of unproved theorems, and decided to bring Ramanujan to Trinity College, Cambridge. This was the beginning of a great friendship and an exceptional partnership.

In 1914, Ramanujan went to Cambridge and by that time, he had further developed new ways on the patterns that he had worked before. By then, it was more about intuition than argument.

Cambridge University gave him a Bachelor of Science degree just for his research in 1916 and on 6 December 1917, he was elected to the London Mathematical Society. In 1918, he became the youngest Fellow in the entire history of the Royal Society. On 13 October 1918, he was elected a Fellow of Trinity College, Cambridge, and was the first Indian who was conferred with this honor.

Ramanujan faced considerable difficulty settling down in London. Being an orthodox Brahmin, he faced major problems with his diet. His cultural differences and his strict vegetarian diet, added to the climatic difference took a heavy toll on his health. In 1917, he was hospitalized in a serious condition. However, in 1918, his health showed a marked improvement and in 1919, he returned to India. However, his health worsened and, despite good medical treatment, he died on April 26, 1920, in Madras (Chennai).

Within a short span of 32 years, Ramanujan had contributed more to mathematics than any other mathematician had. The well-known English mathematician, G. H. Hardy, who worked with him for a number of years, called him a gifted, talented, and a natural mathematical genius. With very little formal training in mathematics, he contributed significantly to mathematics, especially in areas of continued fractions, analysis, the number theory, and infinite series.

Hardy had also remarked that Ramanujan could have become an exceptional mathematician if his skills had been recognized and honed earlier. It was said that he was unquestionably one of the great masters in the field of hypergeometric series and continued fractions. It was due to his patience, calculative mind, combined with a sharp memory and insight, that he was a great formalist of his days.

Although Ramanujan did not offer any proof for most of his mathematical results, new mathematicians have validated and proved many of them. A few of them were found to be wrong, but the vast majority have been tested and shown to be correct.