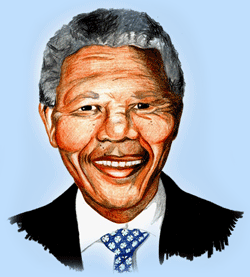 Nelson Mandela, the first black President of South Africa, became a hero to people across the globe. He was awarded the Nobel Peace Prize in 1993 for his wisdom and courage in bringing people together to live in peace and harmony. Such was the impact of this powerful politician, that a new species of spiders is named after him.

Nelson Mandela was a civil rights leader in South Africa. He gained popularity and respect for his long fight against apartheid (racial prejudice) and bad governance. Apartheid was a system where non-white (blacks) citizens were differentiated from the white race. They did not enjoy equal rights and often worked as slaves for the white citizens in South Africa. They were ill-treated and lived in very poor conditions. Nelson Mandela along with many others fought hard for his people to enjoy equal rights to citizenship in South Africa.

He served 27 years in prison as punishment for his protests against the apartheid government. After he was freed from the prison, he worked harder to achieve human rights and a healthier future for people in South Africa. Later he became the President of South Africa.

He grew up in a poor family in a small South African village. When he was 7 years old, his schoolteacher nicknamed him “Nelson” and that name stuck with him. In his autobiography, Long Walk to Freedom, published in December 1994 he revealed the truth behind his nickname. The excerpt from his book reads…

No one in my family had ever attended school. On the first day of school, my teacher, Miss Mdingane, gave each of us an English name. This was the custom among Africans in those days and was undoubtedly due to the British bias of our education. That day, Miss Mdingane told me that my new name was Nelson. Why this particular name I have, no idea.

When he was nine, Mandela was adopted by his father’s friend, who belonged to the Thimbu Royalty and was a prosperous clan chief of the Mvezo city.

In school, Nelson Mandela learned about the African history and his forefathers’ struggle with discrimination and poverty. He wanted to help his people. As he grew up, Mandela traveled to Johannesburg to study Law; and he started the nation’s first black Law practice, here. Later, he joined the African National Congress (ANC), a group that fought for racial equality.

Nelson Mandela joined the African National Congress and soon became its leader. Initially, he forced the congress and the protesters to follow the non-violence approach preached by Mohandas Karamchand Gandhi's (Mahatma Gandhi). But later, he was doubtful that this peaceful protest would work and created an armed branch of the ANC. He planned to bomb specific government buildings, without hurting or killing people. He was caught and deemed as a terrorist by the Government of South Africa and was sent to prison.

In 1948, the government introduced racial segregation policy, which prevented the non-white population from gaining economic opportunities. In response, Nelson Mandela toured across South Africa and encouraged people to participate in non-violent protests against the apartheid. Soon, he was arrested for establishing anti-government activities and was sentenced to a life in prison. His imprisonment led to severe protests on the globe that eventually eased the economic sanctions for his people in South Africa.

For the next 27 years, he served his prison sentence, which brought his anti-apartheid movement in limelight on an international level. Several people from around the globe joined his campaign and in early 1990s, apartheid practices ended.

In the prison, often, he was co-erced to end his movement in exchange of winning his freedom, but he refused to bend his principles, and said, he would rather die for his cause- where people of all races enjoy equal rights in South Africa. He was finally released in 1990.

On 11 February 1990, F.W. de Klerk, South African President released Nelson Mandela from the prison, and they worked together to end the apartheid. Three years later, they both won the Nobel Peace Prize for their dedicated efforts.

Upon his release from the prison, he won the first democratic election in 1994 and became the President of South Africa. Finally, his life-long effort at ending the apartheid had paid off, as all ethnic groups were allowed to vote in this election. During his anti-apartheid movement, Nelson Mandela was a strong force in maintaining the peace and calm in the country and preventing violence.

In 1994, Nelson Mandela was elected as the first black President of South Africa. During his tenure at the office, he worked towards improving education, housing, and economic opportunities for the nation’s huge black population. In 1999, Nelson Mandela retired from his Presidency and in the same year, he established the Nelson Mandela’s Children Fund - a charity to help poor South African children.

Nelson Mandela continued to promote peace around the world. In 2007, he found The Elders- an organization of world leaders, committed to stopping conflicts and encouraging human rights in the world.

The United Nations declared a Global Holiday on his birthday, 18 June as- Nelson Mandela International Holiday.

One of Mandela’s famous saying was “Education is the most powerful weapon which you can use to change the world.”

« Back to MenuNext: Oprah Winfrey »