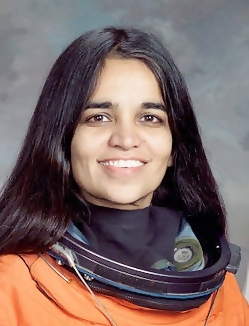 Kalpana Chawla, a renowned name in the history of India, who had a distinguished name in the field of Aerospace Engineering, holds lot of titles to her credits.

Born in India, in a small village called Karnal, located in the district of Haryana, she always had a passion and love for moon and stars. It didn’t make her a poet or someone who dwells just seeing the galaxy. Her passion made her explore her desires and she succeeded.

She excelled in the academics although she had to encounter so many struggles. She had many achievements and meritorious credits, which threw light on her.

She got married and flew to US with her husband, who was her mentor, a great supporter and of course her trainer. She pursued her master’s degree in the US, a MS in Aerospace engineering in Texas, in the year 1984. Following, she successfully had her doctoral degree, a Ph.D.

In the year 1995 she joined NASA. Although she worked for US and represented United States of America, she lived as an Indian at heart!

Although she reached great heights, she loved to stay simple. She was a pure vegetarian and was very religious. She followed Hinduism and had been a role model for many on various aspects.

Her dedication earned her a special place in her career and she was assigned as a mission specialist. She flew to space in the missile STS-107. Unfortunately when she was about to reach the earth, in the Texas, the space shuttle was blasted and she left us.

« Back to MenuNext: Karl Marx »