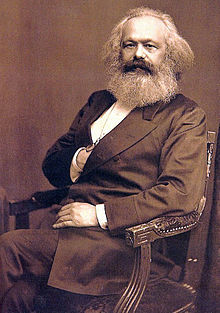 Any book on global history is incomplete without the mention of Karl Marx. He was a 19th century revolutionary and an expert in subjects ranging from philosophy and economics to sociology and journalism. Marx’s contribution to economics (the relation between labour and capital) laid the foundation for many academic developments. Marxism is still a very commonly spoken about theory. He wrote and published many books, out of which the most acclaimed is ‘The Communist Manifesto’.

This famous man was born was born on May 5, 1818 in a city named Trier in Germany, which is situated on the banks of river Moselle. Both his parents were rabbis. However, his father decided to convert and baptised Karl Marx as a Protestant due to the barriers of Jewish involvement in society as full citizens. When he was in 17, he joined the University of Bonn to study law. Following this, he attended the University of Berlin where got interested in Hegelianism (the beliefs of GWF Hegel which revolved around rationality).

In 1836, he got engaged to a childhood acquaintance and daughter of a gentleman (whom Marx took a liking to), Jenny von Westphalen. In the same year, he joined law at Berlin. Though his academic work was in the field of law, he was intrigued by philosophy and joined a group named the ‘Young Hegelians’ who believed in Hegel’s theory of all-prevailing rationality.

Karl Marx then spent a few years (1843-45) of his life in Paris along with his wife, as a communist and a writer/co-editor of a newspaper. It is here that the concept of Marxism saw a foundation. He also met his good friend Friedrich Engels. However, Marx was expelled from France due to his ideas that had the potential of sparking unrest.

Brussels saw Marx as a resident for another few years (1845-47) under the condition that he stayed away from publishing material on contemporary politics. Similar to Marx, there were many who were exiled from other places and who found solace in Brussels. His friend, Engels, shortly joined him. Both of them visited England and co-authored a satirical book on historic materialism named ‘The German Ideology’.

He wrote this amongst others like ‘The Poverty of Philosophy’. Marx and Engels were both important members of the ‘Communist League’ which was a political society aimed at appealing to the people for a working class revolution. It was the influence of this, which prodded him to publish his greatest work, ‘The Communist Manifesto’. There was almost no time between the publishing of his book and the breakout of revolutions in 1848.

After the breakout of the initial revolutions, Marx went to Paris after which he revisited his country during 1848-49. In a place named Cologne, he became the editor of a newspaper named the Neue Rheinische Zeitung, that was in favour of a democratic line and Karl Marx found himself poring over the paper and straining each nerve for the newspaper.

Marx shifted base to London in 1948 and spent the rest of his time here. He got involved in a difference of opinion with two men named August Willich and Karl Schapper over the ideals of the Communist League as well as the German Workers’ Educational Society. He gained support for the former and lost it for the latter. He was such a controversial writer for a popular newspaper that his articles called for active screening for criticism. He used other names in places he visited for himself and for his family members in order to make it harder to track him. Owing to ill health, he peacefully passed away on March 14, 1883. When his housekeeper asked him for last words so that she could write them down, he replied ‘Go on, get out - last words are for fools who haven't said enough’.

Like many famous people, Karl Marx’s work gained acclamation only after his death. This is because a large number of his publications were delayed by none other than himself. Such a delay paved the way for interested academicians and others to gain access to his works only much later compared to the time during which he actually wrote them. Since he was also extremely famous, there are many modifications to his work which in circulation. Nevertheless, Karl Marx has given much to the world, particularly in the areas of surplus value, materialist conception of history, class struggle, contributions to the labour theory of value, alienation and exploitation of the worker.

Marxism continues to be a very popular subject of debate and discussion since he still has a profound impact on thought and politics. He has been cited as one of the nineteenth century's three masters of the "school of suspicion", along with Friedrich Nietzsche and Sigmund Freud. He is also classified as one of the three principal architects of modern social science along with Émile Durkheim and Max Weber.

Marx’s contribution to readers, especially in the fields of philosophy and economics has been very notable. Apart from ‘The Communist Manifesto’ and ‘The German Ideology’, his most notable contributions to the literary world are ‘Das Kapital’ (1867), ‘A contribution to the critique of political economy’ (1859), ‘The poverty of philosophy’ (1847), ‘The Eighteenth Brumaire of Louis Bonaparte’ (1852) and ‘The Civil War in France’ (1871). As mentioned earlier, much of his work was noticed only after his death. A few of his notable publications in the field of economics are ‘Critique of the Gotha Program’ (1891), ‘Wage-labour and capital’ (1849) and ‘Value, Profit and Price’ (1898).

Though he was involved in controversy, the world remembers him as an astute academician, a prolific writer and an unrelenting believer. Here is something he believed in: ‘Reason has always existed, but not always in a reasonable form’.

« Back to MenuNext: Mao Zedong »