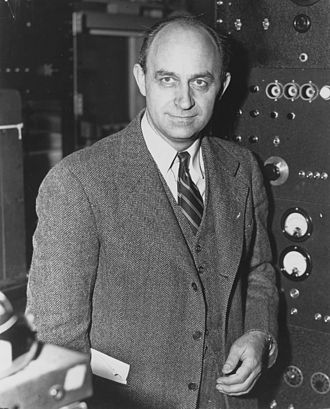 Enrico Fermi is counted as one of the men who is referred to as the ‘father of the atomic bomb’. He was a scientist from Italy who made his mark in contributing towards developing nuclear energy. As a young boy Fermi had displayed an interest in physics and could grasp the subject well, this assisted him to easily enroll at the University of Pisa directly when he was just 17 years old. Four years later he was awarded a doctorate. Fermi’s first major contribution in the field of nuclear physics came in the 1930s. Fermi and his colleagues created isotopes of many known elements successfully and he was also the one to discover that the rate at which neutrons were injected into the nucleus had a major part in the outcome of the energy. Fermi was awarded the Nobel Prize in 1938 for these crucial discoveries. Concerned over the up rise of anti-Semitism in Italy, Fermi and his family moved to the US. He still continued his work at Columbia University and later at the University of Chicago doing research in nuclear physics. A brief outline of his early life, contributions and awards are given below:

Enrico Fermi was born in Rome as the third child of Alberto Fermi and Ida de Gattis, on 29 September 1901. His father was a division head in the Ministry of Railways and his mother worked as an elementary school teacher. He was the youngest in the family and was accompanied by a sister and a brother.

His passion for science that started at a young age was also shared with his brother. They played with electrical toys and were also good at building electric motors by themselves as boys. Tragic struck when Fermi’s elder brother died when he was just in his teens. But Fermi kept going with his love for science and studied mathematics, astronomy, mechanics, and acoustics from books his father’s friend sent him to quench his curiosity.

Fermi was a very brilliant student at his university and organized seminars on quantum physics at the request of the director, Luigi Puccianti. He received his doctorate in physics in the year 1922 and later won a scholarship from the Italian government in 1923 through which he studied under Professor Max Born at the University of Göttingen.

Fermi was also awarded a Rockefeller Fellowship in 1924, after which he went to work with P. Ehrenfest in Leiden in South Holland.He returned to Italy in the same year and worked as a lecturer in Mathematical Physics and Mechanics at the University of Florence. He also worked as a professor at the Sapienza University of Rome in 1927.

Fermi built a team of budding physicists with the help of his friend Corbino and Franco Rasetti. Franco Rasetti took the position as his assistant and contributed his assistance in recruiting talented students like Ettore Majorana, and Edoardo Amaldi. This team worked together with Fermi and conducted researches on various practical and theoretical aspects of physics. In 1928, Fermi published ‘Introduction to Atomic Physics’. This text was soon to become an informative text for university goers in Italy.

Fermi was a very dedicated person when it came to spreading knowledge of physics. He constantly gave public lectures to promote this subject and soon became famous internationally. His presence attracted foreign students to travel for their majors to Italy. Hans Bethe was one of the budding German physicists who traveled to Italy during this time.

Fermi migrated to the United States in 1938. He fled Italy to escape the fascism that was prominent in the country. He was celebrated in the US and offered with many reputed positions. He finally chose to take up the post of a professor at the Columbia University where he taught till 1942.

He decided to settle in the United States and became an American citizen in the year 1944. He was then appointed as a professor at the Institute for Nuclear Studies, University of Chicago. He spent the rest of his life there. The first man-made self-sustaining nuclear chain reaction was supervised by Fermi. It was initiated in Chicago Pile -1 in 1942. His research on induced radioactivity which occurs when a metal that was previously stable is made radioactive by exposure to specific radiation is one of Fermi’s best-known works.

He was a Nobel Prize winner in 1938 for his contributions to the field of physics with his demonstrations of the existence of new radioactive elements created by neutron irradiation, and for his associated discovery of nuclear reactions brought by slow neutrons. In 1942, he was presented with the Hughes Medal for his excellent contributions to the knowledge of the electrical structure of matter, his researches in quantum theory, and his experimental studies of the neutron.

Fermi passed away after he was diagnosed with stomach cancer. He died on November 28, 1954. It was an untimely death and it left the world devastated.

« Back to MenuNext: François-Marie Arouet (Voltaire) »