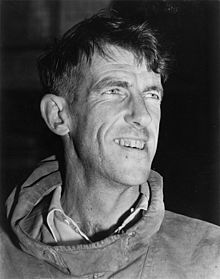 Edmund Hillary came from a humble beekeeper family, to become the greatest man in the history of mountain climbing. He was the first explorer and mountaineer to set foot on the summit of Mount Everest. Hillary achieved this landmark success on May 29, 1953 with the Nepalese Sherpa, Tenzing Norgay. For his roaring success, the British monarch, Queen Elizabeth II knighted him.

Edmund Hillary was born on 20 July 1919 to Percival Augustus and Gertrude Hillary in Auckland, Dominion of New Zealand. In 1920, his family migrated to Tuakau (south of Auckland), as his father was allotted a land there. His grandparents had emigrated from Yorkshire, England to Wairoa (Northern Auckland) in the mid-19th century.

He received his education at the Tuakau Primary School and then the Auckland Grammar School. Edmund Hillary was an intelligent child, and he finished primary school two years earlier than the usual period. However, he was an average student in the high school. He was a petite and shy boy who would often be lost in his books and kept dreaming of adventures, which perhaps motivated him to attain feats in his life. He developed the habit of reading during his high school days when he took a two-hour long train journey to reach school. In the Auckland University College, he studied science and mathematics.

He gained confidence upon learning the boxing sport. His interest in mountaineering sparked at the age of 16 years, during a school trip to Mount Ruapehu. He discovered that although he was a clumsy giant at 6 ft. 5 inches, he had greater endurance and strength than most of his hiking friends. In 1939, at the age of 20 years, Edmund Hillary accomplished his first major climb, reaching the peak of Mount Ollivier, nearby Aoraki (Mount Cook in the Southern Alps). He continued his passion for exploration and mountaineering in the coming years, conquering several lofty peaks around the world.

Upon completing his formal education, he joined the family business of beekeepers. In summer, he pursued the business, while winters encouraged him to explore his surroundings. He joined the Radiant Living Tramping Club, which taught him a holistic health philosophy. The club’s association with the Waitakere Ranges helped Hillary develop his love for the outdoors. He served in the New Zealand Royal Air Force as a navigator during the outbreak of World War II.

In 1953, the Chinese-controlled Nepal gave permission to the British team of mountaineers to make an attempt at scaling Mount Everest. During those days, the Nepalese Government permitted only one expedition a year, and hence this permission was highly important to the team. John Hunt, the leader of the expedition invited Edmund Hillary to join.

Edmund Hillary joined the Everest reconnaissance expeditions in 1951 and again in 1952. These feats brought Hillary to the attention of Sir John Hunt. He was the leader of an expedition sponsored by the Joint Himalayan Committee of the Alpine Club of Great Britain and the Royal Geographic Society. The teams was to make the attempt to climb the Everest in 1953.

For climbing a tall mountain like Mount Everest, a large group of people is required. The expedition involved 400 members, and they climbed the mountain in stages; moving to a higher altitude every few weeks; slowly adapting to the high altitude. At each stage, lesser number of people would continue to climb. Once the remaining members reached the final camp, two teams were selected to climb the last stage to the summit. The first team comprised of Edmund Hillary and Tenzing Norgay, while the second one had Tom Bourdillon and Charles Evans.

The team of Tom Bourdillon and Charles Evans attempted first, but they failed to reach the summit. They reached 300 feet, but had to return. This paved way for Hillary and Norgay to try for the summit. They faced severe challenges, including a 40-foot rock wall that is today called “Hillary's Step”- before finally reaching the top. The team of Edmund Hillary and Tenzing Norgay on May 28, 1953, was the first to climb to the top of the world! Due to the thin air that made breathing difficult, the team stayed at the top for a few minutes before returning to announce their achievement to the world. For his remarkable achievement, the British monarch, Queen Elizabeth II, knighted him.

Although Sir Edmund Hillary is renowned for being the first explorer to reach the world’s tallest summit of Mount Everest, he continued his adventure, and climbed other mountains around the globe. Over the next several years, he climbed numerous other peaks in the Himalayas. In 1958, Hillary and his team was the third team to reach the freezing South Pole. They were also the first group to use motorized vehicles to arrive there.

In 1992, Edmund Hillary appeared on the New Zealand $5 bill, which made him the only New Zealander to appear on a banknote during his or her lifetime, as opposed to the contrary, where famous deceased personalities would be displayed on the currency bill.

On January 11, 2008, at the age of 88 years, Sir Edmund Hillary died of heart failure at the Auckland City Hospital at 9 A.M. In his honor, a big state funeral was held at the Holy Trinity Cathedral; where thousands of citizens, aristocrats, and bureaucrats from countries around the globe and the Gurkha soldiers from Nepal paid their respects. The flags were lowered to half-mast on all Government and public buildings and at the Scott Base in Antarctica.

Edmund Hillary’s famous quote: “It is not the mountain we conquer but ourselves.”

« Back to MenuNext: François-Marie Arouet (Voltaire) »