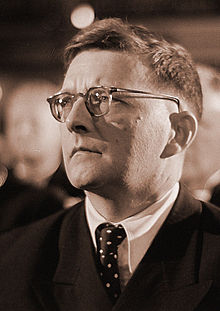 Dmitri was neither a scientist, nor a war veteran, but has contributed immensely to the world in the field of music. Dmitri Shostakovich was terrific pianist, composer and highly talented musician of the 20th century.

He composed music and played the piano in various styles like Orchestral, Chamber Music, Symphony, Keyboard, Modern Composition, Original Score and even Soundtracks for various movies. The genres, which he dealt with, are classical, Avant-Garde and Stage and Screen music. Thus, it can be said that he is ambivalent and multitalented in the field of music.

He rose to popularity in Russia with the support of the then government, which was under Mikhail Tukhachevsky. However, the period after that was not as rosy for him as he was having a friction-filled relationship with the government. However, this did not stop his from bagging national and state level awards.

He was born on September 25, in St. Petersburg, Russia. His father was a learned man who studied both mathematics as well as physics, and worked with the renowned scientist, Dmitri Mendeleev. Whether it is just a coincidence that our musician’s name and that of his father’s guiding star is a mystery. There is no concrete evidence that Dmitri Shostakovich was named after Dmitri Mendeleev though the doubt lingers. Dmitri Shostakovich exhibited his innate talent in the field of music early on, while taking lessons from his mother. This talent extended to clearly remembering music. At the tender age of 12, he made his first composition. A year later, he was admitted to the Petrograd Conservatory, where, under the close watch of the then head, Alexander Glazunov, he was promoted.

Though Dmitri Shostakovich was talented and had friends, he was politically detached. This warrants mention since the period during which he was active saw much of political revolution. Besides, his friends were also trying to guide him in a political way. His extent of detachment was such that he failed in his Marxism examination paper. However, maybe this helped him focus on music better. The very first public achievement was when his composition, the First Symphony, was premiered in 1926. He wrote this for his graduation at just nineteen years of age.

During his early career, Dmitri was not much appreciated as a pianist and therefore he shifted his attention to composing music. He also started working on theatre and opera. He had barely begun to establish himself as a musician when he encountered his first criticism for the stage play, ‘Lady Macbeth’. A popular newspaper named ‘Pravda’ ran an article showing it and those associated with it, including him, in negative light. Due to this, his income decreased significantly. This happened in 1936.

Unfortunately, the ‘Great Terror’ began around this time and a significant number of his friends and relatives were directly or indirectly killed. At the end of this year, he himself withdrew his very own composition, the Fourth Symphony. The exact reasons for doing so are still not clear. Overall, 1936 was not one of the best years for Dmitri Shostakovich but it was a year of pulling back so that he could go farther in the future.

Dmitri’s next composition, the fifth symphony was a blow on every critic who denunciated him during 1936 for his work. The positive response was so overwhelming that it wiped out the damage done by the fourth symphony and put Dmitri back on his pedestal, where he belonged. In September 1937, Dmitri ventured into teaching so that his financial spine strengthened.

During the Second World War, Dmitri created his next few masterpieces. The most celebrated piece is the Seventh Symphony. His eighth symphony, though a success, faced some criticism to which Shostakovich responded by saying, “When the Eighth was performed, it was openly declared counter-revolutionary and anti-Soviet. They said, 'Why did Shostakovich write an optimistic symphony at the beginning of the war and a tragic one now? At the beginning, we were retreating and now we are attacking, destroying the Fascists. In addition, Shostakovich is acting tragic, that means he is on the side of the fascists.'” The eight symphony was officially not banned though it was boycotted.

Dmitri was denunciated for a second time in 1948. However, he bounced back to the artists’ screen post Stalin’s death in 1953.

In 1964, he almost reached the end of his musical journey with the composition for the Russian film, Hamlet. He developed major physical illnesses. A polio attack, which affected his right hand, greatly affected his piano playing. He was relentless. He gave up drinking and smoking. He also suffered from heart attacks and falls that damaged his legs. He wrote in a letter “Target achieved so far: 75% (right leg broken, left leg broken, right hand defective). All I need to do now is wreck the left hand and then 100% of my extremities will be out of order”.

He passed away at the age of 69 in Moscow, Russia on August 9 1975. The awards and accolades accumulated by Shostakovich span the United States, the United Kingdom, Finland, Austria and Denmark. His compositions prove to be evergreen as they are still well searched on popular music and video search engines like Wynk and YouTube.

An interesting thing to note is that there are various ways by which people know him. At the outset, it seems like just these are variants of the spelling and pronunciation of his original name. If we analyse deeper, it shows that he and his music have touched lives across cultures within Russia and outside it too. Some of these names are ‘Dmitry Dmitriyevich Shostako’vich’, ‘Dimitri Chostakovitch’ and ‘Dimitri Schostakowitsch’.