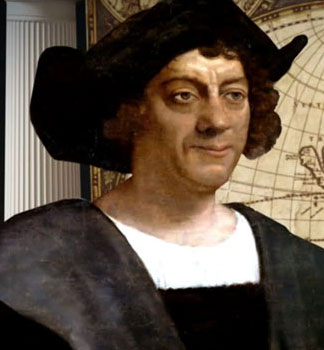 Christopher Columbus (1451 – 1506) was an explorer, colonizer, and navigator who was born in Italy. Columbus is remembered as the discoverer of the Americas. He played a key role in helping bring the Americas to the forefront of the western consciousness. His discoveries and travels set the foundation for the colonization of Latin and North America later by Europe.

Christopher Columbus was born in the Republic of Genoa in the year 1451, today this place is known as North Western Italy. He was born into a middle class family and his father was a wool merchant. Sailing was a skill that Columbus learnt from a very early age. He later put his skill to use as a business agent. He travelled around Europe to England, Ireland and later along the West coast of Africa.

Columbus was not a scholar, but he is greatly remembered as an enthusiastic self-educated man, who learnt extensively on subjects like astronomy, science and navigation and he also learnt different languages. Columbus was fluent in Latin, Portuguese and Spanish. Columbus believed in the spherical nature of the earth along with a few others when most Christians still held the view that it was flat. He was an ambitious man who hoped to find a Western approach to the profitable Spice markets in Asia. He was hopeful that sailing west rather than the east would lead to countries like Japan and China.

Christopher Columbus approached the Catholic Monarchs of Spain for the necessary funding and support to aid his journeys, and as part of his offer he convinced them that he hoped to spread Christianity to the ‘heathen lands’ of the East. The Spanish monarchs agreed to fund Columbus. The monarchs were hoping to gain an upper hand in the lucrative trade markets while only being partly interested in the missionary efforts itself.

Columbus completed his first voyage in 1492. He had planned to sail to Japan but ended up in the Bahamas, where he named the first island he saw San Salvador after Christ the Savior. This island was initially Guanahani by the native Lucayan inhabitants. Columbus made a total four journeys, he sailed largely around the Caribbean islands of Cuba, Jamaica, and the Bahamas. He also took to the mainland, to places like Panama. Columbus was not the first person to reach America, the Norse expedition led by Leif Ericson is one of the successful voyages to America before Columbus. But what sets Christopher Columbus apart is that he was the first to travel and establish permanent settlements in America. Columbus’ reports on his voyages inspired all the major European powers of the time to attempt and colonize portions of America over the next 400 years.

Columbus was appointed as the Viceroy and Governor of the Indies in the island of Hispaniola as part of the deal with the Spanish Monarchy. However, in 1500, on the orders of the monarchy, Columbus and his brothers, who were also delegated with governorship by Columbus, was arrested and placed in chains on proof of lack in proficiency, misrule and barbaric practices in exercising control over the new colonies under them. This imprisoning didn’t last long, Columbus and his brothers were released several weeks later. Columbus was not allowed to be governor of Hispaniola after these allegations.

Columbus is said to have become increasingly religious towards the end of his life. He particularly became fascinated with Biblical prophecies and also wrote a book named, ‘Book of Prophecies’ in 1505. Columbus passed away in 1506. He was 54 years old and he died of a heart attack related to reactive arthritis. During his last days Columbus suffered from frequent pains owing to his journeys. Undoubtedly, the harsh and demanding conditions of frequently travelling across the seas and land weighed upon Columbus’ health.

Columbus is honored in America as the man who helped in putting America on the map. He also has a national holiday celebrated annually in his name in Spain and parts of America, it is known as Columbus Day and it is observed on the 12th of October. It is the anniversary of Columbus’ arrival to the Americas.

Recent views of Columbus have been critical toward his colonization of the natives. Among other reasons for this critical view are the treatment and the fact that a massive disappearance of the native Taino people of Hispaniola took place during his governance. There has been evidence pointing to mistreatment of native Indians, which is said to have set the path for the next several centuries of mistreatment in the European colonies.