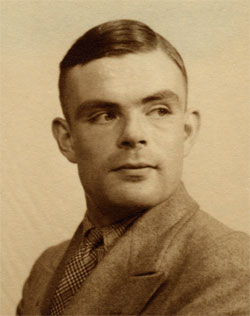 Have you heard about Alan Turing? He is one of the great personalities of the world! He is an intellectual, a brilliant mathematician, philosopher and the founder of computer science. Read briefly about this great personality.

He had passion and love for mathematics since his childhood. After completing formal school education, he studied his favourite subject at the acclaimed Cambridge University.Â After completing the studies, he worked towards exploring the massive world, the quantum mechanics. His research and studies at Cambridge made him develop the proof that all automatic computations wonâ€™t solve the mathematical problems. This concept is named as Turing machine. Turing machine served as a strong base for all modern theories of computation.

He started working as a part time secret agent for the Government Code and Cypher School in the cryptanalytic department. When the war broke out, he earned his full time job in the same department and started working at the Headquarters.

It was only Alan Turing who decoded and interpreted all the messages conveyed by the machine. His decoded messages acted as an important intelligent boost to the supporters. He designed a machine called bombe, which flawlessly encrypted all the messages in German. His invention earned all the fame and recognition, made his a renowned personality.

He further invested a lot of time developing the machine to process logical information with ease. All his ideas were abruptly dismissed and disapproved by his colleagues. Unfortunately, the machine was never invented, and his ideas werenâ€™t given life, otherwise, it would have earned him great honour.

He developed the body of his blueprint idea in the Manchester University, which played a vital role as a strong foundation to the artificial intelligence field. Soon, he was elected as the member of the Royal Society.

He was arrested for trying out homosexuality, which was an offence.Â In order to get out from imprisonment, he had hormonal injections. While the case filed against him was withdrawn, he was terminated from the Bletchley Park. Sadly, he committed suicide in a couple of years. If he had survived, he would have made a lot more amazing inventions and set a benchmark for many computing theories and technological devices!

« Back to MenuNext: Alexander Graham Bell »