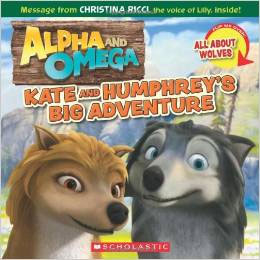 Watch the ‘wolfy’ game of fun and adventure in the form of an animated movie. This movie is based on the famous ‘The Great Wolf Games’.

It is an American-Canadian animated movie. This is the third series movie of the popular cartoon, Alpha and Omega series. Two wolves from different packs lost their way and landed in a foreign land. They should find the way back home, yet their love ruins it all. Were they able to get back home?

Humphrey was a friend of Kate. She met Humphrey and had a conversation with him about her marriage in a park. However, unfortunately, they were trapped by park rangers. They learned that they were shifted to a new place and kidnapped for reproduction. Humphrey was happy, but Kate felt terrible. After huge argument, Marcel and Paddy, the park rangers told Kate and Humphrey to help them reach their home.

Meanwhile, the Alpha and Omega packs found that Kate was missing. Tony threatened the Alpha pack that Kate should return home before the next full moon day and if not, war would be declared. Meanwhile, Lilly, the younger sister of Kate wanted to marry Garth. The journey of Kate and Humphrey back home is filled with lots of surprises, action and fun.

Are they able to return home before the war begins? What happened to Kate and Humphrey, Lilly and Garth?

This is a light and warm story, with beautiful animations, characters and fun. Watch the movie and have fun.

« Back to MenuNext Movie: Big Hero »