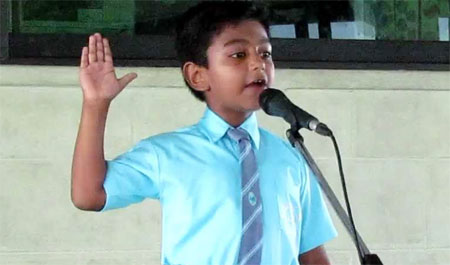 A speech on the life of Mahatma Gandhi

On this occasion of Gandhi Jayanthi celebrations, I stand before you with great pride and honour, to speak a few words about the life of Mahatma Gandhi, the father of our nation, India. Gandhiji is the pride of every Indian, a hero who is great enough to be respected by the whole world, yet was simple enough to be clad in just a dhoti.

In South Africa, Gandhiji had many experiences that changed him into a strong and courageous leader, who fought against injustice. One such experience was that he was thrown out of the first class compartment of a train, even though he had a first class ticket, just because he was an Indian. In the next few years, Gandhiji became the leader of the Indians in South Africa. It was in South Africa that Gandhiji first used ‘Satyagraha’ or non-violent resistance, to fight against injustice.

After spending 20 years in South Africa, Gandhiji returned to India in 1914. Quickly, he became the leader of India’s fight for independence from the British. He led the ‘salt satyagraha’ and the ‘Quit India Movement’. Many times he was arrested and jailed, but he never gave up. His efforts bore fruit, when the British granted independence to India, in August 1947. That was a glorious day for India, but that joy did not last long.

Sadly, on the 30th of January 1948, Mahatma Gandhi was shot dead by Nathuram Godse. Thus ended a life that changed the history of our country forever. A life that proclaimed that love and peace can conquer evil, hatred and violence.

My dear friends, Mahatma Gandhi said, “My life is my message”. What is the message that his life gives us? The message is courage, harmony, non-violence and peace. The message is also that in this world, loving your fellow human beings is the only way to live.

Once, while getting into a train, Gandhiji lost one of his slippers. What did he do? He threw the other slipper also out, saying that to the person who finds it, it was no use to get only one slipper!

Dear friends, in today’s world, where there is violence and injustice everywhere, we have a beacon of light that is Mahatma Gandhi, who shows us how to live. Shall we follow his ideal of truth, peace and non-violence in our own life? Shall we follow a life of simplicity, instead of wastefulness and vulgar luxury?

The answer is a resounding ‘Yes’.

« Back to Menu Next » Quiz Questions and Answers