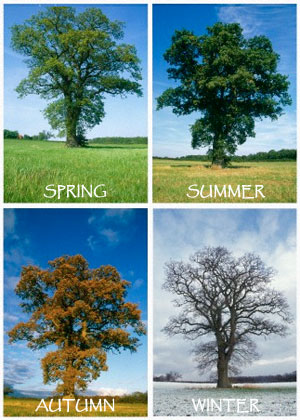 Learn science online! We do enjoy various seasons and climates don’t we? How do these seasons change? Let us read and find out?


Do you know what four seasons are?
» Summer
» Autumn
» Winter
» Spring

Every one of you has a favorite season. Have you ever thought about what causes the changes in the atmosphere?

In addition, the earth revolves around the sun, and takes a year to complete one circle. The earth spins and moves around the sun. As a result, the relation to earth with sun, viz., the position and distance changes.

When the earth tilts towards the Sun, the more heat from the Sun causes summer. When the earth spins far away from Sun, it causes winter. The distance between Earth and Sun in the orbit causes changes in the season and changes the climate.

What happens when the earth does not rotate?

Simple! There will not be any change in the climates and we will have same season all round the year.

Some interesting facts about seasons:


Every season has exclusive fruits and vegetable. Eating those seasonal fruits and veggies more in the respective season makes you healthier.

So, tell me, what is your favorite season, and why you like it?

« Back to Menu Next Topic: Carnivorous Plants »