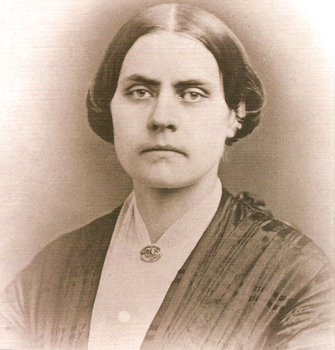 Women have always been considered inferior to men because a male-dominated society is the harsh reality of our world. However, this notion has changed and women are emerging from these conventional ideas and helping in shaping the present and future of our societies. None of this would have been possible if not for women like Susan Brownell Anthony; who was not only a feminist and civil rights activist, but played a prominent role in the women’s suffrage movement in the United States. This is one of the most important movements in the history, which helped women gain their right to vote.

Susan was born to Daniel Anthony and Lucy Read on February 15, 1820, in Adams, Massachusetts. The urge to serve the society and bring about social reform ran in the family blood. She was the second eldest child and had six siblings. Two of her brothers, Daniel and Merritt supported the anti-slavery movement and for doing this, they went to Kansas. Susan’s sister, Mary, became a public school principal in Rochester and also a woman’s right activist.

At the age of six, Susan’s family moved to Battenville, New York. Her father managed a large cotton mill here. When Susan Anthony turned 17, she was sent to the Quaker Boarding school where she reluctantly endured the harsh atmosphere.

However, in the panic of 1837, when the economy of US faced a jolt, she was forced to end her studies after one term. Her family also became the victim of the economic depression and they had to sell everything. Fortunately, her maternal uncle bought most of the belongings and rescued them from the tough time. To support her father, Anthony started teaching at the Quaker Boarding school to ease off her father’s debts.

In the year 1845, her family moved to a farm on the outskirts of Rochester, New York that was bought partly with her mother’s inheritance. There, they met other Quaker social reformers and together, in 1848, they formed a new organization called Congregational friends. This soon became a regular Sunday gathering for the local activists to discuss important matters. Anthony met Frederick Douglass, who was a former slave and an abolitionist who later became her lifelong friend. Douglass was also a part of the Sunday gathering.

Antony’s family started attending the services at the First Unitarian Church of Rochester, which focused primarily on social reform. Inspired by the Seneca Falls convention, another women’s rights convention was held in the church in 1848.

Away from all this, Anthony was living a different life at Canajoharie. She had moved there to be the headmistress of the women’s department. She started wearing stylish clothes and wanted social reform. She was also upset with the fact that men were paid more than women for the same type of work. In 1849, the academy at which Anthony was teaching was shut down and she moved back to her family. With the support of her family, she devoted her entire life to reform work. It is even said that she would spend the rest of her life with the money she earned by public speaking.

With full grit and determination, her life’s most important journey had begun. She dedicated her time in learning about the reform issues and eventually she was drawn to the more radical ideas of people like William Lloyd Garrison, George Thompson, and Elizabeth Cady Stanton. She also started wearing the famous Bloomer dress, which were also called the “reform dress” as they gave women more space to move and breathe, compared to the tight corsets that women were forced to wear.

Anthony was introduced to Elizabeth Cady Stanton, in 1851, who became her closest friends and co-worker. Their partnership was not only important for them, but also for the suffrage movement that would be a prominent turning point in the history of the world. Stanton was one of the organizers of the Seneca Fall convention. Later, she moved to New York City, in 1961 along with her family. Anthony and Stanton spent most of their time together. Some biographers have said that Stanton had spent most of her time with Anthony than with any other adult including her own husband.

Temperance was one of the most troublesome issues of that age. Due to this, the law gave husbands complete control of the family and its finances. This often led to the destruction of the family as women could do little when their husbands were drunkards. In 1853, the World's Temperance Convention was held in New York City, but to no avail as women were not allowed to speak there.

Attending many women’s rights conventions from 1848 to 1852, Anthony focused on this movement, but Suffrage was yet to become the important goal of her life.

Apart from the women’s rights movements, Anthony also helped in the anti-slavery movement, which was the highlight of her time.

In 1868, Anthony and Stanton started “The Revolution” which was a weekly newspaper focusing primarily on women’s rights which included the Suffrage movement. Apart from this, they wrote on other topics like politics, the labor movement, and finance. With the motto of “Men, their rights and nothing more: women, their rights and nothing less”, this newspaper became a forum for women to discuss their opinions on the topic that concerned them. By 1880, Anthony’s efforts had paid off and she became a prominent figure in the US.

The Suffrage movement was one of the reasons why women can vote and Anthony and Stanton had a huge role to play in this epic movement. She never got married her whole life.

After serving the society and living a selfless life, Anthony died at the age of 86 in her Rochester home. She died of a heart failure and pneumonia. She was a leader and feminist in her own right who decided to take charge and change things that bothered her. She is one of the inspirational women that history has given us and we have a lot to learn from her.

« Back to MenuNext: Subash Chandra Bose »