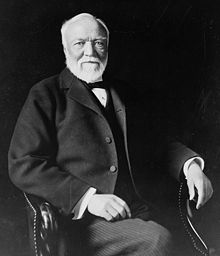 Andrew Carnegie, a Scottish-American industrialist was one of the key figures in the expansion of the American steel industry towards the end of the 19th century. Not only was he known for his leadership qualities, but he was also a well-known philanthropist. He also encouraged the upper and rich class to utilize their wealth for the betterment of the society, thereby initiating a wave of philanthropy.

Andrew Carnegie was born in Dunfermline, Scotland, to a poor family and was named after his grandfather. In 1836, the family shifted to a larger home somewhere close by to the current day Reid's Park. He was deeply influenced as a boy by the writings and teachings of Robert Burns. He was also extremely fascinated by the Scottish heroes, Rob Roy, Robert Bruce, and William Wallace.

By his teens, when his father had fallen on hard times, his mother took up the responsibility of being the sole breadwinner of the family. His mother not only sold potted meats at their sweet shop, but also helped his uncle, her brother at his cobbler shop.

It was during this period, when Colonel James Anderson opened his personal library of 400 volumes to him. This gave a great boost to Carnegie’s passion for education and reading. He resolved at that time that if wealth ever came to him, he would see to it that other poor boys receive the same education that were imparted to the children of noble men.

By 1853, he quit his job as a telegraph operator and took up a job at the Pennsylvania Railroad, assistant to one of the senior most officials in the Railroad, Thomas Scott. It was here he learnt about the railroad industry, management, and business. Within a span of three years, Carnegie was promoted to Superintendent. Thomas Scott helped Carnegie’s first few investments including a 500$ investment in the Adams Express.

Just prior to the Civil War, Carnegie orchestrated a merger of the Woodruff's company and that of George Pullman. George Pullman was the inventor of the sleeping car for first class travel. This was a very successful deal for both Woodruff and Carnegie. Carnegie continued to work for Scott implementing many new improvements in the process. In 1861, Carnegie was assigned to the Superintendent of the Military Railways.

It was from here, Carnegie slowly started making investments, and soon realized that his investments, particularly from oil brought him enormous returns. Carnegie invested about forty thousand dollars in the Story Farm on Oil Creek in 1864. This investment yielded over one million dollars in dividends and petroleum. Pittsburg was a center of wartime production due to the immense demand of iron products. Carnegie and a few others established a steel rolling mill, which became the source of Carnegie’s fortune.

Post war, sometime during 1865, Carnegie left the railroads to devote his energy to the iron industry, particularly the Keystone Bridge Company. He formed the Keystone Bridge Works and the Union Iron Works in Pittsburgh. Although he left the rail industry, he kept close connections to its management though Thomas A. Scott and J. Edgar Thomson. This made it possible for him to acquire contracts for his Keystone Bridge Company. He also gave shares to Scott and Thompson. His first steel plant was named after Thomson. Carnegie was a charming young man along with an extremely good sense of business. He was invited to many social functions, and he used these opportunities to further his own cause, and soon became a success in the world of business.

By 1870, Carnegie had become a confessed capitalist. He started buying bonds of smaller railroad companies and other public companies. During this period, he managed to sell an enormous amount to bonds, from which he made handsome commissions.

Since 1870, for a period of over ten years, Carnegie spent most of his time to the steel industry. The Carnegie Steel Company was responsible for revolutionizing the steel production in the country. He built plans all over the United States, using technology that made the manufacturing of steel easier, productive, and faster. He streamlined the entire steel making process, and by 1890, the Carnegie Steel Corporation was the biggest in the world.

After his mother’s death in 1886, Carnegie married Louise Whitfield. They had a child named, Margaret, who was born in 1897. Soon he began to spend about six month, every year in Scotland.

He later built the Pittsburgh’s Carnegie Steel Company, which he sold to J. P. Morgan in 1901 for about 480 million dollars.

Andrew Carnegie was product of the “Age of the Robber Barons". The period between 1865 and 1901, this highlighted the characteristics of business enterprise and innovation that changed America from an agricultural to the largest industrial nation.

The entrepreneurs of the period along with Carnegie not only built and modernized industry, they were also technologically minded, thereby increasing productivity, mining, manufacturing, and railroading. It was due to them, there was an incremental increase in the wages of workers.

He soon began to set up trust funds for the welfare of people, and also built free public libraries. In 1895, the impressive Carnegie Institute of Pittsburgh was set up and it housed an art gallery, a music hall, and a natural history museum. While the gallery collected contemporary paintings from all over the world, the history museum, also financed archeological expeditions.

Carnegie also donated $2 million each to set up the Pittsburgh Carnegie Institute of Technology and the Carnegie Institution at Washington. Carnegie also served on the Board of Directors of Cornell University. He constantly contributed to these institutions and also to different schools. CIT is currently known as Carnegie Mellon University after it merged with the Mellon Institute of Industrial Research. He also built the Carnegie Hall in New York City. Another of his philanthropic acts was to set up The Foundation for the Advancement of Teaching, which would provide pensions for University Professors.

Besides his business and charitable interests, Carnegie enjoyed traveling. He also enjoyed entertaining and meeting leading social figures in many fields.

Carnegie also wrote several books and numerous articles, and his 1889 article "Wealth" was later published, as the 1900 book The Gospel of Wealth, where he emphasized those wealthy men should distribute their riches for the welfare of the community.

Andrew Carnegie died on August 11, 1919, at his summer home in Lenox, Massachusetts, due to bronchial pneumonia.