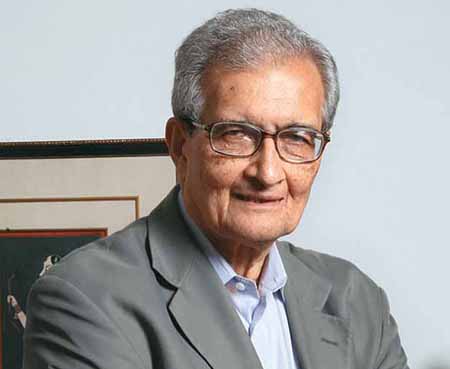 Amartya SenAmartya Kumar Sen won the 1998 Nobel Prize in Economics for his work on the economics of famine.

Amartya Sen was born on 3 November, 1933, at Santiniketan in India. Sen came from an academic family, and was actually born on the campus of a small, progressive, coeducational school that was founded by the Indian philosopher and poet, Rabindranath Tagore. In fact, it was Tagore, who named him as Amartya, which means immortal (eternal) in Sanskrit.

Ashutosh, Sen's father, was a professor of chemistry at Dhaka University, and his mother, Amita, was a writer who also performed in dramas, which Tagore wrote.

Sen attended the Santiniketan School, which, was very different from the English language schools run in the country by the British. The classes were taught in Bengali, but the school was emphasizing global culture. However, the school, like others in India, had no room for the poor.

A chance encounter with a poor, hungry man at the age of nine completely changed him. Before this encounter, Sen had lived in a much-protected environment. He was obviously unaware of the large degree of hunger and suffering among India's poor. There was also a major famine at that time, and it was destroying the country, leading to the deaths of thousands of people from starvation.

He was even more shocked and upset, when he realized that no one in his family was affected or concerned by the famine. His grandfather gave Sen a small cigarette tin and said he could fill it with rice and give the rice away, but to give only one tinful per family. Sen noted at the time that the effects of the famine depended mainly on social class. In other words, only the poor seemed affected, as the rich class had plenty to eat.

This memory of widespread death and devastation in the midst of plenty continue to play in Sen’s mind. Later, he became preoccupied with issues of hunger and poverty, and was his prime concern throughout his career.

Sen later wrote, "Starvation is the characteristic of some people not having enough food to eat, instead, it is not the characteristic of there being not enough food to eat." To put it in detail, the famine was not caused by any shortage of food, but by the fact that the wages paid to poor laborers, could not meet up with the rate of inflation. As a result, the poor laborers just could not afford to buy food, despite it being available in plenty in the market. Similar such instances made Sen think deeply about that particular events. He finally realized that economic constraints made people vulnerable to serious violations of their rights.

Chose to Become an Economist

By this time, Sen knew that he wanted to follow the path of many members of his family and become an academic. However, he was not sure what he wanted to study, and considered Physics, Mathematics, and Sanskrit, before choosing Economics.

Finally, he went to Cambridge, England to study economics at Trinity College, when he was 19. The college was a mixture of political diversity and an oasis of tolerance, which Sen found refreshing. He felt free to learn from economists instead of being forced to classify himself as a supporter of one thinker.

Sen married Nabaneeta Dev in 1960, whom he had met in India, and they later had two daughters, Antara and Nandana. In 1988, he married an Italian Economist by the name of Eva Colorni. She however, succumbed to cancer in 1985. From her, Sen had two kids, Indrani and Kabir. After her death, Sen went to Harvard University, where he worked on the UN Project, the Human Development Index. Later, in 1991, Sen married an Economic Historian by the name of Emma Rothschild.

After teaching at Cambridge, England for six years, he went back to his previous position at Harvard as Professor of Economics and Philosophy in 2004.

« Back to MenuNext: Andrew Carnegie »