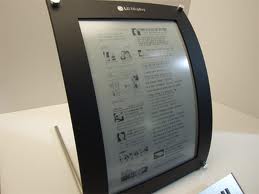 Electronic paper, also known as e-paper or Electronic Paper Display (EPD) is a display which imitates the appearance of ordinary paper. Electronic paper is portable and reusable – it can be refreshed (electronically) and written upon millions of times.

Many different technologies are used for making e-paper. The most commonly used e-paper consists of millions of tiny plastic capsules which are sandwiched between two sheets of flexible plastic. Each capsule, which is as narrow as a human hair, contains several positively charged white beads and negatively charged black beads floating in a clear fluid.