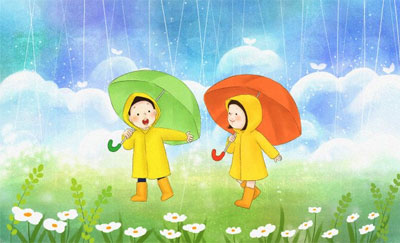 Amazing Facts About Weather and Nature

Here are some intriguing facts for children with some awesome trivia. These amazing facts on weather and nature will surely interest kids. The facts depicted are fascinating and youngsters will easily memorize them.

Water is the lone substance on earth that is lighter as a solid than a fluid.

Geologists have found out that there is more water miles below and between the stones of the Earth’s mantle, rather than the combined amount of water from the world's seas. The extraordinary pressure and weight of the huge rocks above, keeps the boiling hot water from evaporating and vaporizing.

Around 8,000 feet below the sea's surface, there is a ridge of volcanoes that stretch round the globe. Vents in these gaps emit mineral rich water at temperatures of over 700 degrees Fahrenheit. Bacteria and other microscopic organisms live sustaining on the minerals found in these hot waters. Tubeworms that develop to six feet long and foot long molluscs that grow 500 times faster than their land-relatives can be found here.

When researchers bored through the ice in Antarctica's Lake Vanda, they found that the water at the lakes’ base was amazingly warm, at about 77 degrees Fahrenheit. Ice crystals warm the water by concentrating on the lake's base.

A dome of ice that is about two miles thick covers a large portion of Greenland. The ice is so heavy that if by any chance it abruptly dissolved, then the island's bedrock would rise by about 2500 feet.

Did you know that the more salt you put on ice, the more the ice liquefies?

Pouring cats and dogs is a common idiomatic expression. But, there really has been no reports of any showers of cats and dogs. However, there have been genuine cases from around the globe about frogs, fish, snakes, beetles, snails, jellyfish, worms and dead winged-animals raining down from the sky.

Interestingly, sometime back in England due to a waterspout, it rained frogs.

The place with the most number of sweltering days each year is Mount Wai'ale'ale on Kauai, Hawaii – up to 350 days every year. Just imagine 350 days without rain!

The longest time that a place stayed without rain is Arica, Chile. There was no rain from October 1903 to January 1918, for a period of 14 years!

Waterfalls don’t happen only on land. There are also monster waterfalls under the sea. The biggest underwater waterfall is close to Greenland. It drops nearly 2 miles down, which is close to three times than the largest land waterfall.

Raindrops do not generally have a drop like shape. In fact, they are round in shape.

Did you know that the greatest rainfall ever recorded in a day was 73.62 inches at Reunion in the Indian Ocean on 15 March 1952? That is more than 6 feet of water per day!

Antarctica gets less rainfall than any other mainland on earth.

The tropical rainforest get around 80 to 400 inches of downpour yearly. On an average it gets around 2 inches of rain every hour, on the assumption that there is heavy rainfall.

Did you know that the Sahara, one of the world’s biggest arid deserts with sand up to thirty feet deep was at one time an area with lush streams, marshes, rivers, and rich fields? Cave painting that are 9,000 years old, found in the caves of Sahara, show men grouping cows and chasing lions and hippos. Around 2,000 years back these shepherds and animals left because the place was fast turning into the desert that we know today.

Did you know that the greatest canyons in the planet are submerged? Underneath the Bering Sea off Alaska, there are seven gigantic canyons. These include the Bering Canyon that is 240 miles in length, Navarin Canyon that is 60 miles wide, Zhemchung Canyon which is 9000 feet deep and there are more. In contrast, the Grand Canyon in Arizona is just 10 miles wide, one mile deep, and 250 miles in length.

Iceland is basically an island that has been formed from the lava of volcanoes. Real eruptions occur only once in about seven years. However, since the year 1500, over 65 percent of the planet’s lava output has poured into Iceland.

Sometime during February 1943, the ground opened up and began to spew red-hot lava in a town in Paricutin, Mexico. While the height was only 35 feet the first day, by the year 1952, it had soared to a height of 1,250 feet and had already buried two towns.

The loudest sound in history was recorded in July 1883 when a volcano in the island of Krakatau erupted. The blast was heard 3,000 miles away in Madagascar. Fiery, super-hot ash clouds shot 25 miles into the sky. The eruption created a huge tsunami of 175 feet with speeds of over 400 miles an hour and devastated over 300 towns.

We are certain that you and your kids loved reading these facts. Visit us regularly for more amazing facts. Enjoy.