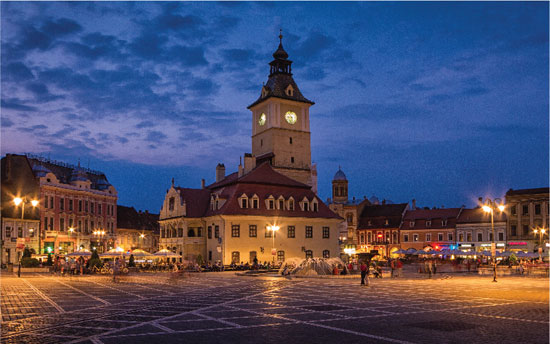 The word Romania comes from the Latin word of romanus, which means ‘citizen of Rome’. The oldest human remains found in the Peștera cu Oase (The Cave with Bones) indicates the presence of human settlement in the region of modern day Romania. The remains, which are about 37,800 years old, are the oldest known remains of humans in Europe.

The present day Romania was formed after the two principalities of Moldavia and Wallachia gained independence in 1856 from the Ottoman Empire, which had been ruling over them for centuries. The united new state was named Romania, which officially gained independence from the Ottoman Empire in 1877. The nation came under the occupation of the Soviet Union in later years and banished King Michael in 1947 who returned to the country in 1997. Romania joined NATO in 2004 and the European Union in 2007.

The population of Romania as on January 2016, is about 19.9 Million with a population density of about 83 people per square kilometer. It has a total area of about 238,390 square kilometer as per the United Nations Statistics Division. The geographical area of the land that forms the country of Romania is the twelfth largest in the whole of Europe.

The land of the country shares boundary with Serbia, Bulgaria, Hungary, Ukraine, and Moldova while one side of the nation has the Black Sea for its boundary. The majestic Danube River falls into the Black Sea after covering a large distance through eight countries forming the Danube Delta. The marshland delta is one of the largest in the world, is a preserved delta in Europe, and is a biosphere reserve. And because of its biodiversity, it is also a World Heritage Site.

The oak tree found abundantly in the country is the National Tree, while other trees found significantly are beech, elm, ash, maple, linden, fir, spruce, pine etc. The land has ample places to explore which makes the country a good place for hiking, boating, bird watching, trekking, fishing etc. Large number of tourists visit the nation every year and the number of travellers only increases every year for the country. The resorts around the Black Sea are very popular among the tourists while skiing resorts are also very popular among the tourists in Romania.

Apart from the Danube Delta, the other places of interest for the tourists are old churches, castles, scenic natural beauty, and old villages, which are in abundance throughout the country. The Maramureş region is very famous because of the traditional richness of the place; it has eight old wooden churches, which are on the UNESCO’s World Heritage lists. Apart from the churches, there are seven World Heritage Sites in the country and the most notable among them are The Historic Centre of Sighișoara and The Sculptural Ensemble of Constantine Brâncuși at Târgu Jiu. The Infinity Column sculpture of the Sculptural Ensemble of Constantine Brâncuși is considered to be the National Motif of the country.

Many Romanian writers who contributed to the literature scene are the 19th century writers namely, George Coșbuc, Ioan Slavici, Mihail Kogălniceanu etc. The Romania-born Holocaust survivor Elie Wiesel and the writer Herta Müller were awarded the Nobel Peace Prize and the Nobel Prize for literature respectively. Romania was the home of a good number of artists in the 20th century whose popularity spread through the world. Constantine Brâncuși is a famous Romania-born artist and sculptor famous for the Sculptural Ensemble at Târgu Jiu and the Bird in Space sculptures.

Romania is one of the largest producers of plum in the world and Țuică, a strong brandy made from the fruit is the traditional alcoholic beverage in the country. It is the preferred drink in the nation compared to other drinks such as wine and beer. The cuisine or Romania is not so different from the cuisines of Greece, Bulgaria, and Turkey. There are a number of traditional dishes and recipes cooked in the country are mostly prepared for particular days or holidays. Chiftele, Tobă, Tochitură on Christmas days and Drob, Cozonac etc. on Easter, and other holidays in the country.

In 1900, the country participated in the Olympic Games and since then the Romanian sportsperson have been doing well in the Olympic competitions for many years. They are successful in different sporting events and a large number of gold medals have been won by its talented sportspersons. The first person to score a perfect ten in gymnastics in an Olympic event was Nadia Elena Comăneci in 1976. Since her time, a number of gymnasts from the country have been winning in different events and championships.

Romania has history throughout its lands and the first known salt works in the world through the process of briquetage has been found around the Lunca village in Romania. The other reason for visiting Romania is that the legend of Dracula has been set up in Transylvania, one of the oldest historical places in the world.