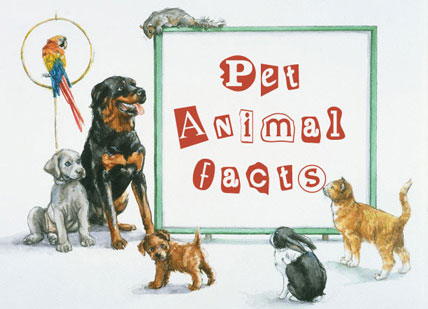 Did you know that both humans and chimpanzees have about the same amount of hair on their bodies, but it is just that the human hair is so fine, that they are almost invisible?

Learning about animals is great fun, and kids love reading these funny trivia on animals. Their curiosity is aroused if animal facts are presented in a fun manner and it will easily help them remember these facts. Kids experience an emotional reaction to animals and it is their appreciation towards animals that help them memorize these facts.

Let us focus today on domestic animals and pets.

As the famous saying goes, a dog is a man’s best friend. The domesticated dog has been one of the most popular companion and working animals throughout human history. There is scientific evidence that confirms that the domestication of dogs could have happened over 15,000 years ago. So we have been friends for a real long time!

Whether they are pets or workers, dogs make wonderful domestic companions. They have a number of qualities, which the humans put to good use. Humans use them for farm work, hunting, security, bomb sniffers, assisting the blind, in addition to so many other purposes.

Did you know that there is an estimated 400 million dogs in the world? Phew!

While there are hundreds of different kinds of breeds of dogs, the most popular breed as per ownership is the Labrador. They make excellent pets and are also used to assist police, and are a common choice as guide dogs. They are gentle, obedient, and intelligent and have plenty of energy.

Did you know that the average life span of a dog is anywhere between 10 to 14 years, and that domesticated dogs are omnivores? The young dogs are called puppies and a litter is a group of offspring.

Let us now move on to some fun trivia on cats and kittens.

Read on and enjoy the wide range of interesting facts about cats and kittens.

Cats have been associated with human for over 10,000 years. Like dogs, they are also equally one of the most popular pets in the world. There are an estimated 500 million domesticated house cats in the world.

Cats have an average life span of about 12 to 15 years. While a male cat is called a tom, a female cat is mostly called a molly or queen. The young ones are referred to as kittens, and a colony of cats is called a clowder. Domestic cats are much lighter than their mighty cousins are and weigh only about 4 kilograms to 5 kilograms. The heaviest domestic cat that is on record weighs about 22 kilograms.

Cats have excellent hearing as well as a strong sense of smell. They sleep for over 14 hours a day thereby conserving energy. They also have powerful night vision that allows to see six times more than what a human can see at night. The cats use their whiskers to measure whether a space is too small for them to crawl through. Cats are also one of the cleanest pets and spend a large time licking and cleaning themselves.

Cats have teeth and bodies adapted for hunting small animals such as mice, squirrels, rats, and small birds. They are lethal hunters and are very similar to their larger cousins. It is impossible for the prey to know when a cat is sneaking upon them, because it keeps noise to a minimum with absolutely no tracks.

Kittens love to play and play fight among themselves. Play fighting is a natural way for them to hone their hunting and fighting skills at an early age. However, older cats are sometimes aggressive towards kittens and sometimes harm them as well.

Did you know that rats breed so fast that in about 18 months, two rats could have created a colony of one million rats? Of course, due to natural selection, most of them do not survive. Or else, we would have to find a pied piper!

The blue whale’s cry is so loud (about 188 decibels) and can be detected about 800 kilometers away.

Did you know that both cows and horses can sleep standing up?

Another interesting fact is the tentacles of the Giant Arctic Jellyfish measure to about 36 meters in length.

The sharks’ skeleton is made entirely from cartilage and not bones, and that the biggest eggs in the world are laid by the sharks.

Another interesting fact - the rhinoceros’ horn is made from compacted hair instead of bone or melanin or other substance.

Did you know that the sheep’s’ stomach is made up of four chambers and each one is used to help them digest the food they eat?

The polar bear’s skin is actually black, despite its white, fluffy fur.

The Tasmanian Devil is the largest carnivorous marsupial in the world, and is only found in the wild in Tasmania, Australia.

Did you know that the housefly’s lifespan is for only two to three weeks?

Did you know that it is only the female mosquito that bites humans?

We are sure that your kids will enjoy these fun facts about animals. Visit us every week for more amusing facts. Enjoy.