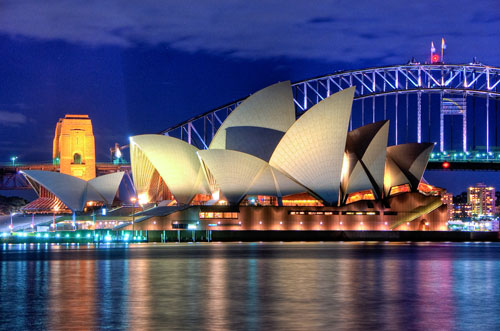 
People have inhabited Australia for over 45,000 years. As of December 2015, Australia has a current population of over 23.75 million people. It is a relatively wealthy country with close to hundred percent literacy levels. However, the main natives of Australia are the Torres Strait Islanders and Aborigines.

Its territory is also the third largest in the world and covers a total area of 7.66 million square kilometers. Australia is one of the most developed nations in the world, with over eighty-one per cent of the populace residing within hundred kilometers to the coast.

Although mainland Australia may be the world’s largest island, it is also the smallest continent. It is further surrounded by over 8,000 smaller islands. The continent stretches over 4,000 kilometers from east to west and close to 3,750 kilometers from north to south, and is the sixth-largest nation by area. The Australia's Highway 1 is the world's longest national highway that covers about 14,500 km, and circumnavigates the entire country.

Australia is also the only continent that is a constitutional monarchy with the monarch of the United Kingdom as its head of state. Since 1901, Australia has been a nation with a single national government, broken down to three levels of governance. This includes, the Federal Australian Government, the governments of the six states and two territories, and about seven hundred local government authorities make the nation.

In fact, if you do not show up to vote in Australia, you will face a fine.

Australia is a country for all seasons. There are four seasons across most of the country. While summer is during the months of December to February, autumn during the months of March and May is autumn, and winter between the months of June and August, spring falls between September and November. You can do practically anything here, at any time of year. Some areas are one of the driest places on earth having an average annual rainfall of less than 600 millimeters.

Australia has a range of unique animals. It has over 4000 fish species, 830 bird species, 380 species of mammals and about 140 species of snakes, 50 species of marine mammals and two species of crocodiles. On top of that close to 75% of Australia's living species are still unknown to man. Australia is also the home to the kangaroo, koala bears, kookaburra, emu, and the duck-billed platypus. In fact, there are close to 29 million kangaroos in Australia, which is more than the number of people.

There are around ten deadliest snakes that can be found in Australia. Most of them, such as the Tiger Snake, Brown Snake, and Taipan keep to themselves. There are also so many camels in Australia that six thousand camels once invaded the Docker River in search of water. It has over ten times more camels than koalas and to top all that, they export camels to Saudi Arabia.

The last time somebody died from a spider bite in Australia was in the early eighties. Although declawing of cats may be legalized in parts of America, it is considered illegal in Australia and few other European countries. There were over ten million koalas around 230 years ago, and now there are only about forty thousand left in the wild. It is fast facing extinction.

There are some amazing geographical facts pertaining to Australia. The Burning Mountain in Australia has an underground natural coal fire that has been burning for over six thousand years. Beachcombers will love to know that Australia has over ten thousand beaches. Statistically speaking, a beachcomber could literally visit a new beach every day for over a period of 27 years.

Australia also has a phenomenal geographical wonders. The Lake Hillier is one such wonder. It has an intense pink color and so far scientists have not come up with an explanation as to the pink color. There is also a river in Australia called the Never Never River. The world’s largest reef, the Great Barrier Reef is also located on its northeastern coast. Mainland Australia’s highest mountain the Mt. Kosciuszko and which is over 7300 feet above sea level. The outback or a desert area covers much of the land.

Now for some intriguing and fun facts.

There is a plant, which is only native to Australia that will make you vomit just by touching it. It is so poisonous that its sting is potent enough to kill humans and even horses.

The famous burger franchise, Burger King is called Hungry Jack's in Australia. The city of Melbourne, used to be known as Batmania. Think about the welcome Bruce Wayne will get here!

For a first time traveller to Australia, it is important to note that it has three separate time zones.

In 1859, about two dozen rabbits were introduced to Australia. They multiplied at such a rapid pace to become over 2 million in ten years. The world's largest cattle station known as the Anna Creek Station is also found in Australia. Funnily, it is larger than Israel.

In 2013, a pig in Australia happened to borrow over 18 cans of beers from a campsite. It eventually got drunk, and then started a fight with a cow. Well, that is Australia for you in a sentence. In other words, people are extremely friendly, and live for the day and do not worry much about tomorrow!