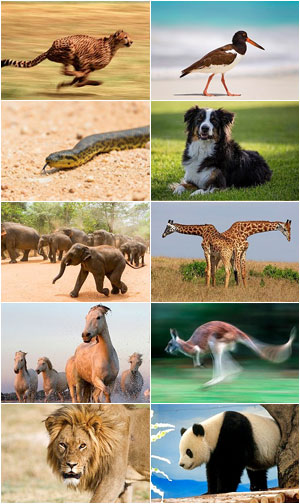 The largest and heaviest snake in the world, which never stops grow until death! Anaconda lives in uninhabited lands in the rainforests, swamp and damp areas.

We all know birds build nests. However, most of the birds don’t sleep in their nests. The nests are just like a guesthouse for the birds to rest and have a short nap.

The fastest on the land and called as the big CATS! Cheetahs are loved the most for their beautiful prints on their body.

Dogs are the best friend of humans! The most popular and favorite pet in the world, shares and depicts love more than a human being. There are more than 1000 breeds of dogs live in the world.

In proportion to their size, they are equally emotional! The huge mammals live closely in the group with lots of love and care. The giants are the most caring animals on the earth! Read a few more amazing facts about elephants that would really surprise you.

Not many kids love frogs. There are in fact many who scream seeing this tiny ugly (sometime beautiful creature). Frogs skin dries out too quickly. So they live in moist areas. Also, they shed their skin very often. The surprising fact is, their dried skin becomes their food.

For a very long time, it was believed that Giraffes are muted animals, where they cannot speak. The real fact is the long necked animals have their own language. The make low note sounds and moans which cannot be heard by humans.

Iguanas are also called as bamboo chickens! The not so popular animals are extremely cautious and they defense very impressively.

Jaguar is the fierce animal from the cat family, largest and the heaviest in the group. Jaguars weigh up to 300 pounds and they have very strong jaws.

The jumpy-bumpy animals cannot walk properly. They simply jump all the time to move from one place to another. They use their tail for jumping. Exceptionally, tree kangaroos can walk and move the feet separately.

The king of the forests! The roaring sound of the lion can be heard up to 5 miles. Although lions are great hunters, they don’t eat everything they kill. The remains of Lion’s food are often finished off by Hyenas and eagles.

Just like dogs, there are many species of monkeys. Monkeys use their tail as a hand. The longer and thicker is the tail, the greater balance they can have.

Numbat is a special and unique animal because of its marsupial. Also called as banded anteaters, numbats love mostly in woodlands. They have very long, thick and sticky tongue which helps them grab the ants to eat.

The big sized birds lay the largest eggs. An egg of an ostrich weighs around 3 pounds, which is equal to 25 eggs of a hen! Ostriches have the ability to detect the earthquake.

Panda, the beautiful animal from bear family looks attractive in black and white combination. Although they can be categorized under big animals, the baby panda of a giant panda is too small. It makes the smallest baby mammal when we exclude baby kangaroos.

The plump and beautiful brides are popular in the birds’ kingdom. They live in woodlands as well as grasslands. Quail can lay up to 15 eggs in a clutch. They build their nests in the vegetation ground.

The cute bunny rabbits are favorites of many kiddies. The plump and pretty rabbits aren’t rodents. Their teeth grow until they die, which helps them chew and trim the foods with eat. The ears of bunny rabbits are the temperature regulator like elephants’ ears.

Seal has more blood in its body proportionate to its size when compared to other animals. It can survive both on wet lands and on ice. Seal’s milk contains 45 to 50 percent fat, the fattiest milk! Eskimos mostly depend on seal for food, clothing, and shelter.

The ferocious national animal of India has the ability to communicate in low notes and tones that is inaudible to human ears. Alternatively, the loud and terrifying roars of tiger can be heard miles away.

Uakari is one of the rarest species of monkey with red face and sharp long fur in gold color. They live in the wet lands of rainforests and live very close to any water resource. They are the smallest monkeys in the world, weigh no more than 10 pounds.

The wild bird changes its partner every year, but surprisingly, the live in a single nest for years.

Wolf is the wild and fierce animal that belongs to the caring and lovable dog family. They live in as a pack of animals. The strange fact is a wolf won’t leave its group and they are social animals.

A tiny bird that appears similar to a squirrel, live in South America.

Yak is found generously in the hilly regions of Tibet. The lesser known fact is they are good swimmers and climb the mountains with ease.

The black and white stripes on a zebra are unique. No zebras carry the similar kind of stripes. This uniqueness helps them protect themselves from the predators.