Short Stories » Why the pigs are foul? 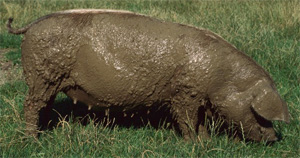 Why the pigs are foul?

Pigs are extremely stench! If there is an animal that doesn’t care about the personal hygiene, then it would be pig! There is an interesting tale why pigs always remain foul and stink.

Very long ago, a pig accidentally fell into a stench pool! They were clean and beautiful for quite a long time.

Since the pig was heavy, it was just not able to get out of the pool. While the pig was struggling, a thirsty lion came near the pool to drink the water. Unable to tolerate the unpleasant smell of the dirty pool, lion moved back.

The pig who drenched in the pool misinterpreted that the lion was afraid of him and moved back without drinking water.

The pig laughed at the lion and said, ‘Oh the brave lion, you are afraid of me. That is so funny! Wanna fight with me?’

The lion was angry but controlled the anger as he could not tolerate the bad smell! He said, ‘May be tomorrow piggy!’

The stupid pig challenged the lion that they would meet the next day! The lion ran away from the stink pig.

The pig rushed to his father and narrated all incidents. The entire family was shocked that the small pig challenged the huge and powerful lion.

His father told him that the lion ran away may be because of his nasty smell! The pig was shocked to hear his stupidity. His father came up with an idea to save his son. He told him, ‘Dear son, mistakenly you have challenged the lion. The only way to save you from lion is make yourself stink and carry an unpleasant smell. If you smell horrible, the lion won’t come near!’

As suggested by his father, the pig drenched in a pond of dirty water and remained all the night in the dirty water. It carried an unpleasant smell.

The lion saw the pig at a distance and rushed towards him. As he approached the pig, he stopped suddenly due to the unpleasant odor from the pig. He stared at the pig and simply went back as the lion was not able to tolerate the stench.

In order to save themselves from the enemies, the pigs developed the habit of drenching in dirt and remains stench forever!

« Back to MenuNext Story: Two Fishermen »