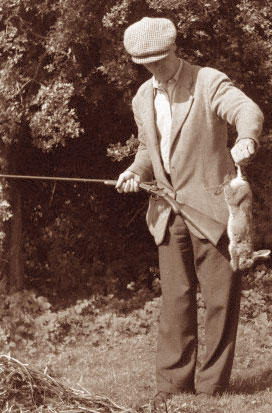 He shot the rabbit and the rabbit fallen down on the ground inside a fence of a garden. The lawyer had a quick glance in and around the garden and he saw nobody was there.

He jumped inside the garden, grabbed the rabbit and when he was about to climb back the fence, he was caught by the garden owner.

The garden owner and lawyer argued for the ownership of the rabbit.

The lawyer told he shot the rabbit and it belonged to him.

The lawyer shouted at the owner, ‘See, I’m a lawyer! I can sue you in the court and get you severe punishment!’

The owner decided to teach a lesson to the lawyer. He said, ‘Okay. I’ll kick you three times with my strength. You again kick me three times with your full strength. Let us continue this until you or me request to give up! The one who gives up lose the game and the other one wins and owns the rabbit!

Lawyer agreed to the ‘Three Kick’ rule and he was confident that he could win it! Apparently, the lawyer looked bigger and stronger than the garden owner.

They then argued on who should kick first. The decided on tossing a coin and the garden owner won the toss. He decided to kick the lawyer first!

The garden owner kicked him on his stomach, his legs and face! The lawyer groaned in pain and before he starts kicking the owner, the garden owner said, ‘I give up! It is all yours. Now, enjoy the rabbit!’

Never underestimate anyone and never become overconfident on your talent and powers. A big blow on the right place on you can bring you down.

« Back to MenuNext Story: Life Worth Saving »